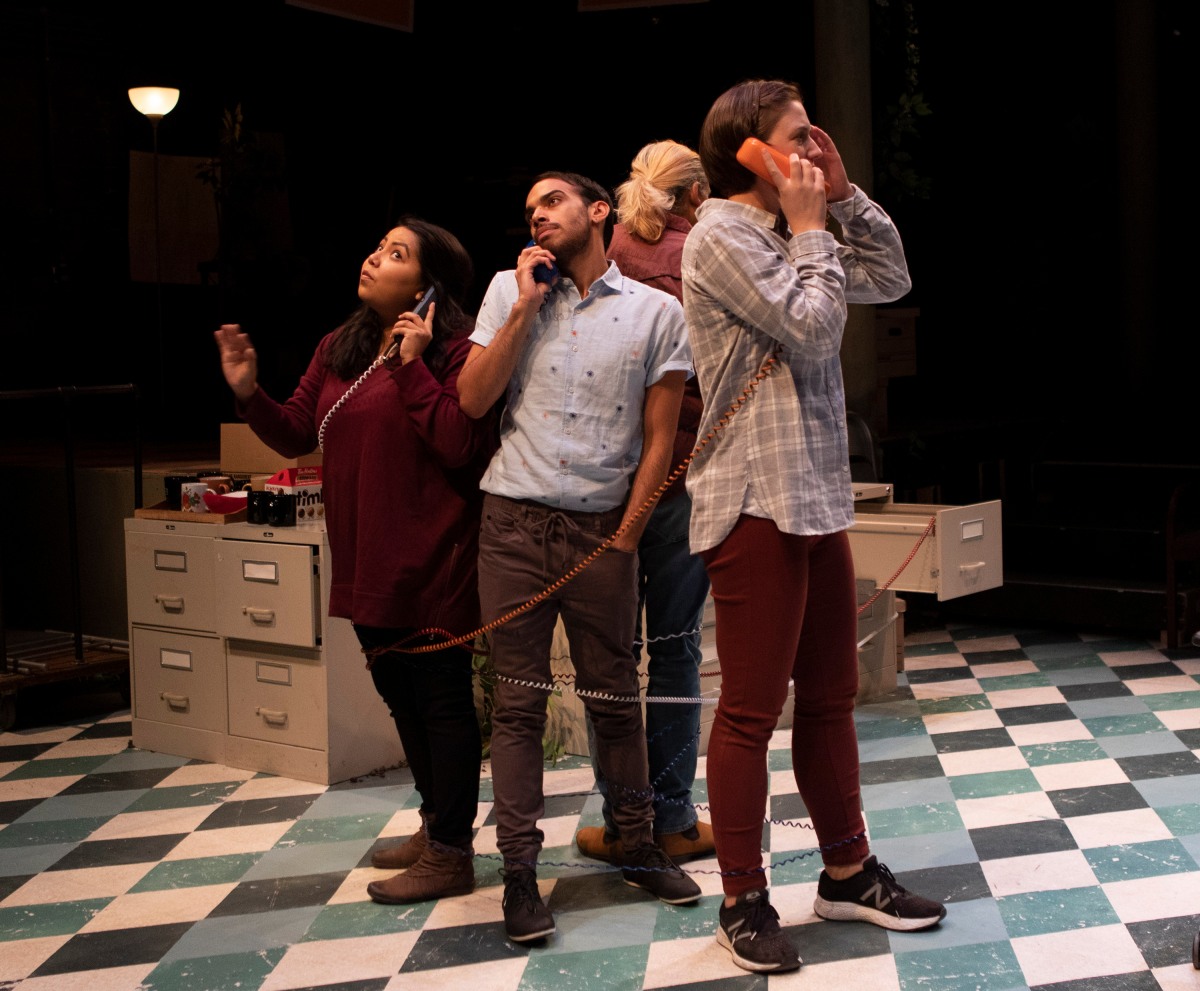 Common Boots Theatre, in association with Nightwood Theatre and Theatre Direct, explores the hope, spirit and skepticism on the ground during the 2015 Canadian federal election campaign in The Election, presented by Theatre Passe Muraille (TPM) in their Mainspace. Written by Natasha Greenblatt and Yolanda Bonnell, with the company and dramaturgy by Yvette Nolan, and directed by Jennifer Brewin, assisted by Theresa Cutknife, we follow the journeys of a diverse, intersectional group of election staff and volunteers as they work the campaign and grapple with troubling or non-existent party policy. Vital, timely and mercurial, it pops with the ideas, perspectives and experiences of Canadians as they prepare to vote, or not.

What do a young gay Jewish man (Terry: Augusto Bitter), a young Jewish feminist with a poli sci Master’s (Zoe: Rachel Cairns), a young Northern First Nations university grad (Skye: Joelle Peters), a South Asian actor doing research for a production of Coriolanus (Samraj: Anand Rajaram), a Northern First Nations Elder and grandmother (Milly: Rose Stella) and a rambunctious hockey-loving jock (Landon: Courtenay Stevens) have in common? They’re all active participants in the 2015 Canadian federal election campaign, with most working for or volunteering with one of the three major parties.

Presenting a selection of diverse, intersectional characters, representing a broad range of perspectives in rural, suburban and urban environments—including some hilarious and cringe-worthy voters, volunteers and politicians—the outstanding, multi-tasking ensemble sometimes plays outside of their own gender and/or ethnicity, adding an aspect of outreach, understanding and even satire to the proceedings as the campaign teams shout out their respective parties and leaders. All of the characters express a level of political and civic engagement and commitment; and all experience a crisis of faith in their party, struggling with doubts over missing platform planks and controversial policy announcements as they strive for a better Canada. Samraj, who’s volunteering for the Liberals, is a skeptic, believing that all parties make promises and deliver nothing; and Skye pushes back against a broken system that excludes and ignores the country’s Indigenous Peoples.

Incorporating a chorus of Land voices (the entire ensemble), The Election goes beyond the passionate, cerebral, and sometimes academic and ludicrous personal and public debates, to acknowledge and embrace the land on which we vote. The land is in serious trouble—and we all need to do something about it before it’s too late. A live a cappella soundtrack (Alex Samaras composer) of vocals, vocalized responses, ambient sound and integrated live audio description highlights the theme of voices; and brings a visceral immediacy to the exchanges of ideas, thoughts and arguments expressed through dialogue and debate—all in an accessible way.

As important as the acknowledgment of the land are the moments where we see and hear the perspectives that include the lived experiences of the original caretakers and newcomers to this land, a land that settler culture and government came to call Canada—the former poignantly and thoughtfully highlighted through conversations between Indigenous characters Skye (Peters) and her grandmother Milly (Stella). And during a powerful scene between Skye and Zoe (Cairns), who works for the NDP, that highlights the profound disillusionment and disgust at a system that wrought cultural genocide, oppression and neglect of Indigenous Peoples—and has yet to make it right—and earnest hope for, and belief in, further progress. Why participate in a such a broken system? Like Zoe says, it’s a deeply flawed system, but it’s the only one we’ve got—and it can change.

The Election serves up all the highs, lows, doubts and fears, spirit and hope that emerge along the campaign trail—and, most importantly, the myriad voices of the people framing and responding to the issues. And, with the 2019 federal election just a couple of weeks away, whether your colour is Liberal red, Conservative blue, NDP orange or Green green—we are all the caretakers of this country and we need to vote to make it the best we can.

The Election continues in the TPM Mainspace until October 27; advance tickets available online. If you require assistance with your booking, please email info@passemuraille.on.ca or phone their office at 416-504-7529.

Error: Twitter did not respond. Please wait a few minutes and refresh this page.

Always loved this gorgeous and humungous chandelier @balzacscoffee in @distilleryto
All the pretty lights @distilleryto Light Festival.
After bringing a bouquet of roses to Leon Rooke and Fran Hill's holiday gathering and exhibit at the coach house, I was surprised with a gift of this painting: My Love Is Like A Red Red Rose. Leon wanted to add more red, so I just picked it up today.
Beautiful holiday hearth on the main floor at @7west_to #brunch
#HappyNewYear Wishing you all good things for 2020.