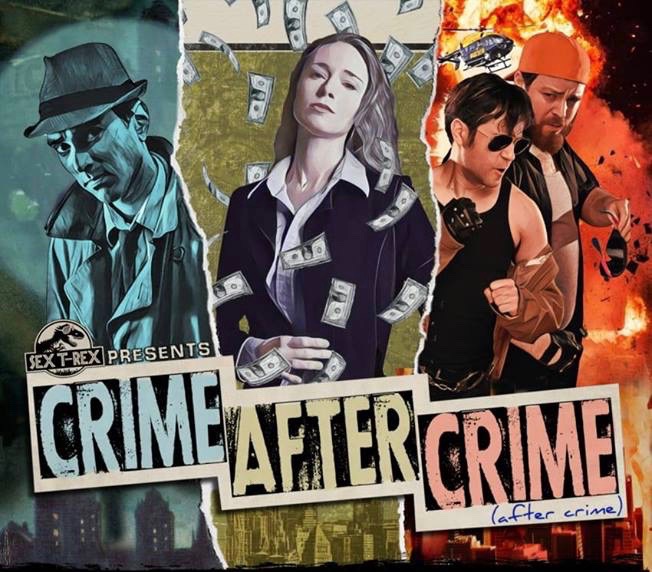 Sex T-Rex presents the Toronto premiere of the hilarious immersive comedy Crime After Crime (After Crime), in partnership with West Neighbourhood House, as they take us into the underground world of a warehouse speakeasy for tales of crime and intrigue; on for a very short run this week at 165 Geary Ave., Unit 2. Highlighting some favourite crime movie genre themes, Sex T-Rex takes us from 1950s film noir, to 1970s heist, to 1990s buddy picture—all stamped with their signature brand of playfully staged action, imaginative use of props and costumes, and big-time satirical fun.

In 1952, private eye Nick Beige (Frid) gets way more than he bargained for when a lovely damsel in distress arrives on his door step looking for help; twin sisters, family machinations and a dangerous search for a hidden treasure ensue. In 1972, Diamond Stone (Morrow) puts together a highly skilled team to pull off a big heist at the Crime City casino; only things don’t go exactly as planned, forcing the intrepid team to improvise their way out of some intense—not to mention sexy—situations. Jumping to 1992, loose cannon detective partners Order and Law (Bradbury and Murray) find themselves out in the cold when they bust the last criminal in Crime City, prompting the Mayor to shut down the city’s police force and legal system; no longer cops, but suspecting that something hinky is afoot, they’re determined to find out what’s going on—and learn that the underlying scheme reaches farther than they ever could have imagined.

Crime After Crime (After Crime) continues at 165 Geary Ave., Unit 2 (between Dovercourt and Dufferin) until February 24; show time details and advance tickets available online and strongly recommended. Some performances are sold out, but you can take your chances at the door. Doors open an hour before curtain time; bring cash for drinks, games and Sex T-Rex merch, as the onsite ATM is on the fritz. Try your hand at some casino games, enter for prizes and stick around for the nightly dance party after the show.