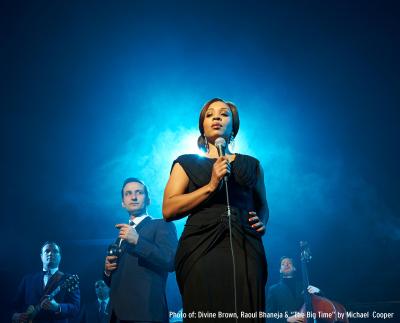 A young boy with a dream – and the harmonica is his ticket.

While Bhaneja challenges the audience’s preconceived notions of who and what a Blues man is, Brown is the perfect Devil’s advocate for Bhaneja’s assumptions on the cultural significance and place of the Blues today. Throughout this theatrical/music hybrid journey, Bhaneja gets schooled on the true meaning and placement of the Blues. More than a technique or a style or an expression – Blues is about roots and about rooting yourself in the music.

Life, Death and the Blues features stellar performances for this ride. Bhaneja is highly engaging, a slightly cocky but extremely likeable and funny guide on this trip, not to mention a talented showman, bringing it with strong vocals and musicianship (dobro and harmonica). Divine Brown is a fabulous foil, standing for no nonsense from Bhaneja, and taking us to heaven with her incredible vocal range and power. And those Big Time boys were cookin’. In addition to the live performances, we were also treated to the sights and sounds of some Blues greats, including Paul Oscher, Muddy Waters, T-Bone Walker and Bad News Brown. I dare you to not be bopping your head and tapping your feet – and even shouting out “Damn!” – during this show (I know I did).

Every performance of Life, Death and the Blues will feature a special finale: an interview and jam session with a living Blues legend, including Chris Whiteley, Jay Douglas, Paul James, Rita Chiarelli and others. Last night’s opening featured the cool sounds of Chris Whiteley & Diana Braithwaite.

TPM also launched a Youth Blues Challenge in conjunction with this production, and sought out some talented young blues artists (25 or under) to perform during intermission up in the cabaret space near the bar. Last night’s young guest was Dov Beck-Levine, who wowed the audience with a solo performance on guitar and vocals.

Life, Death and the Blues is a remarkable theatre/music hybrid, featuring an outstanding cast of actor/musicians – taking us to the Church of the Blues.

Life, Death and the Blues runs on the TPM mainspace till October 19. Do yourself a solid and get yourself over there to see this. You can purchase advance tickets online.

In the meantime, check out the promo vid: