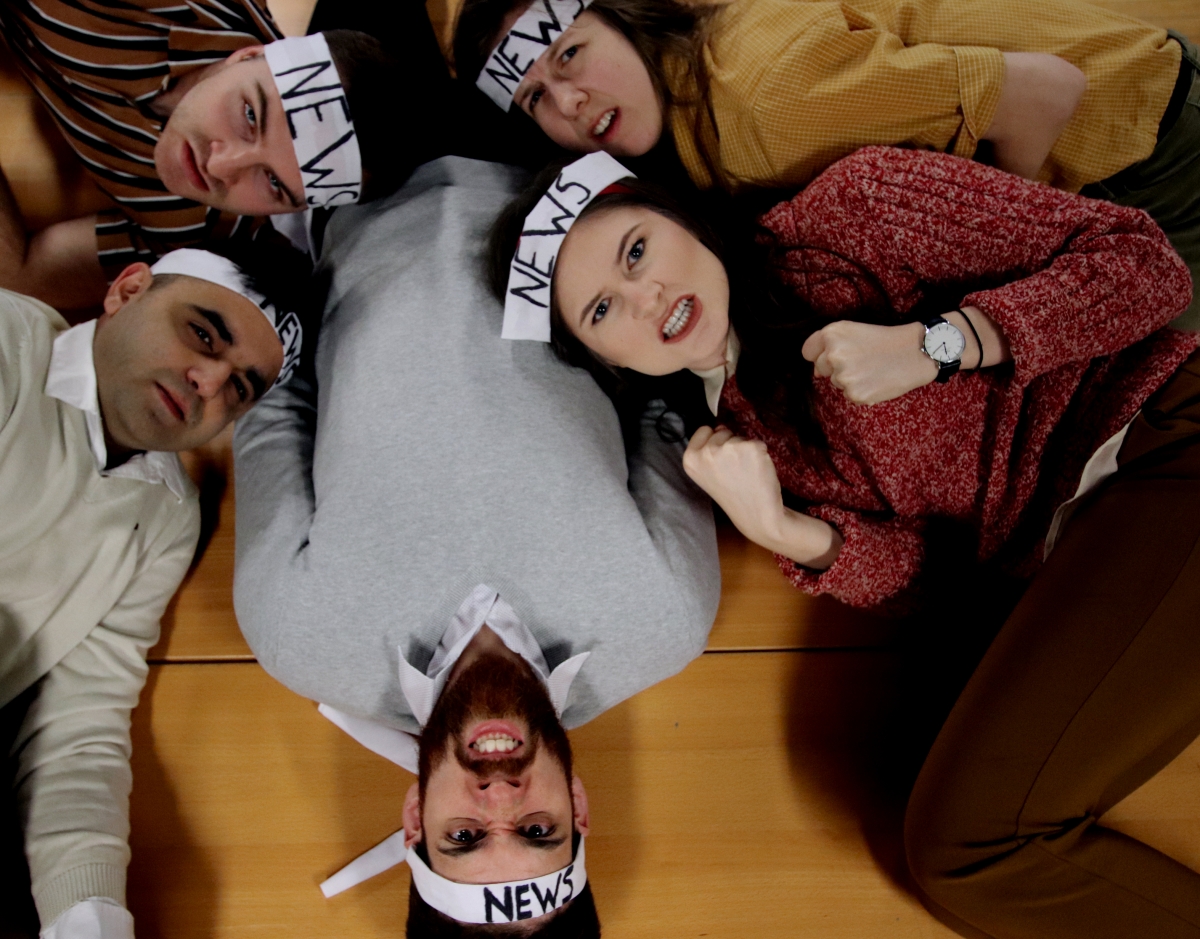 Theatre ARTaud and Lal Mirch Productions, in association with Prairie Fire, Please give us a dark satirical look at storytelling and journalism in Madeleine Brown’s sharply funny, quirky, edgy News Play, directed by Aaron Jan and running at the Annex Theatre.

Brother and sister children’s book team, illustrator Phoebus (Greg Solomon) and writer Joy (Charlin McIsaac), have hit a wall in their career; the fire woman superhero featured in their books is scaring kids and making them feel bad about themselves. When they return to their hometown Peterborough to visit their cousin Winny (Madeleine Brown), a troubled pyromaniac since the death of her parents in a fire when they were all kids—and the inspiration for their work—they find themselves suddenly becoming journalists. Winny’s recent fire escapade accidentally killed two Peterborough Examiner reporters, and Editor in Chief Art (Andrew Cromwell), former classmate and school bully, blackmails them into working for him in exchange for not suing Winny. The goal: sell 100 papers.

The siblings’ first assignment is producing an exciting piece about a local natural landmark—a big rock. They strike gold when Winny injures her hand while punching it, spinning the event into a story of significant bravery and resilience, while also making the town’s “crazy fire girl” look good in the media. This inspires local charity organizer Lyle (Rouvan Silogix) into inviting Winny to be the torch putter-outer at an upcoming event supporting those who’ve soldiered through personal injury.

Things go from crazy to bad to worse when Joy decides to take things to the next level. How far will she go for subject matter that people will want to read? Will her relationship with her brother, who’s against her increasingly extreme methods, be the same? And will their cousin Winny survive it all?

Great work from the cast is this sharp satirical trip. McIsaac and Solomon are great foils as the positive, cheerful Joy and the cynical, edgy Phoebus. Brown gives a lovely vulnerable performance as the shy, awkward Winny, who really does have reserves of strength that largely go unnoticed; still living in a town where everyone thinks she’s crazy, Winny perseveres because it’s her home. Cromwell plays the edge of menacing bully and charming manipulator as Art; you can tell immediately that Art was the school bully, and he’s desperate and amoral enough to go along with whatever scheme will sell newspapers. And Silogix gives lovely comic turns as the clueless, enthusiastic charity organizer Lyle and the gruff Greyhound bus driver.

Telling stories, making up stories and reporting stories—sometimes, they can overlap and get all mixed up. Are we fetishizing personal injury in our news media and charities? And is fake news, however small and local, ever harmless?

News Play continues at the Annex Theatre until July 13; check the show page for exact dates/times and advance tickets. 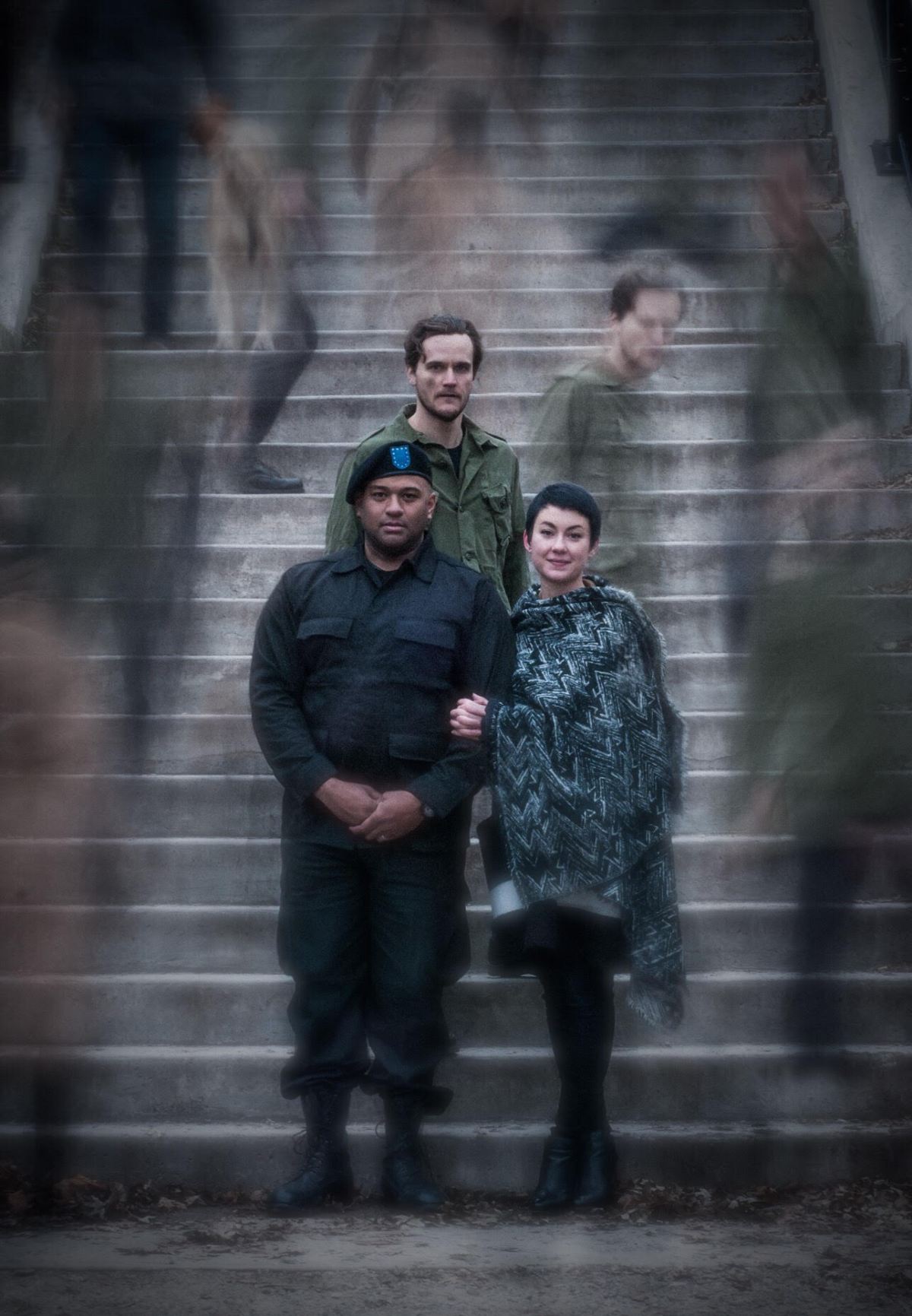 Toronto favourite Shakespeare BASH’d continues its 2018-19 season with a deep-dive into one of the most complex, messily human plays in the Shakespeare canon: Othello. Directed by James Wallis, assisted by Olivia Croft, and featuring a stellar cast, Othello opened last night for a short run this week at The Monarch Tavern. Before our eyes, hearts and minds are poisoned—and deeply human flaws exposed—along the way to a tragic finale in this intimate, powerful production.

Right off the top, Iago (James Graham) plants seeds of doubt and unrest, playing on sentiments of racism, prejudice and misogyny as, from the shadows and with the aid of the jealous, entitled Roderigo (Jeff Dingle, bringing comic relief in a goofy turn as the foolish would-be suiter), drops the bomb on Venetian senator Brabantio (played with candid self-righteous anger tinged with heart-wrenching resignation by David Mackett) that Othello (E.B. Smith), a general with the Venetian army, and his daughter Desdemona (Catherine Rainville) have had carnal knowledge of each other. Iago won’t stand for Othello’s glorified station as a respected, successful general and especially objects to Cassio’s (Dylan Evans) recent promotion over him; and Roderigo wants Desdemona for himself. Seething with resentment and jealousy over men who have that which they do not, both have their minds set on vengeance and scheme to claim that which they feel belongs to them.

Smugly, even gleefully, relating his plans throughout, the cunning Iago speaks directly to us as he maps out how, step by step, he intends to turn Othello against Cassio and Desdemona, all the while using the foolish Roderigo as his own personal bank account and sidekick, and his trusting wife Emilia (Jennifer Dzialoszynski), who serves Desdemona, as an unwitting accomplice. And all while pretending to be everyone’s friend and confidante.

Poisoning hearts and minds by playing on people’s deepest fears, prejudices and weaknesses, as well as their egos—all the while dropping pearls of apt wisdom on his respective targets—Iago manipulates and orchestrates a falling out between Othello and his friend/second in command Cassio, and gradually makes Othello distrust Desdemona’s fidelity, which he inflames by encouraging Cassio to turn to Desdemona to speak on his behalf to Othello. And that damned handkerchief—a treasured gift from Othello to Desdemona, left behind by her and found by Emilia, who gives it to Iago to please him—becomes the last straw when it is found in Cassio’s chambers. Tormented by rage and despair over his belief that Desdemona has been untrue with his best friend Cassio, that seemingly small thing pushes Othello past the edge of reason, with dire and tragic results.

A powerful, compelling performance from Smith as the tragic hero Othello; a soldier’s soldier, forced by systemic racism and oppression to constantly prove himself as a man and as a general, Othello’s great love for Desdemona becomes his downfall as Iago’s machinations work on his jealousy and sense of honour; and even more importantly, his doubts of deserving her as his partner and equal. Rainville exudes a quiet, but luminous, presence as the loyal, tender Desdemona; eschewing social mores and risking the condemnation of her family and friends, Desdemona courageously and authentically follows her heart to be with Othello. Drawn together in a relationship of mutual ‘otherness’—Othello navigating racism and Desdemona dealing with misogyny—he loves her gentle generosity of spirit and she his bravery and perseverance.

Graham is entitled sociopathic perfection as the cunning, vengeful Iago; kind to be cruel as weaves his web of fake news, mistrust and hatred among good, trusting people, Iago is the diabolical puppet master of the tragic tale. Dzialoszynski is both delightful and heartbreaking as Iago’s sassy, witty and neglected wife Emilia; longing to please her husband and, without malice, she becomes an unknowing accomplice in the tragic events that unfold between Othello and Desdemona. And Evans is adorably boyish and cocky as the eager, ambitious young Cassio; flawed and foolish in his own way, Cassio’s reputation and bromance with Othello are tarnished when he fails to govern his wayward behaviour—and his careless treatment of lover Bianca (a playful turn from Natasha Ramondino) signals a man boy with some growing up to do.

Great work all around from this outstanding cast, which also features Melanie Leon (as the stalwart Montana, Othello’s predecessor in Cyprus), Wilex Ly (the fastidious Lodovico) and Julia Nish-Lapidus (the politically apt Duchess and the hilarious drunken party girl Clown).

Just like The Merchant of Venice continues to spark debate over being an anti-Semitic play or a play about anti-Semitism, so too does Othello have at its core the debate of racist play vs. a play about racism. No matter which side of the debate you’re on, there’s no doubt that these plays both reveal, in a very raw and human way, the ways in which the elite dominant culture—in this case, white Christian males—wields its own sense of entitlement and keeps a tight grip on power as it keeps the ‘other’ in their place through systemic oppression based on religion, race and gender. (Sound familiar?) And the sad truth that even good men can be pushed too far, with serious and tragic consequences.

Othello continues at the Monarch Tavern until February 10; it’s a super short run and an intimate venue—and they’re already sold out—but if you get there early and get on the wait list, you may just luck out and find yourself a seat.

Check out this great interview on the debate on Othello being a racist play or a play about racism with actors Smith and Rainville by Arpita Ghosal on Sesaya. 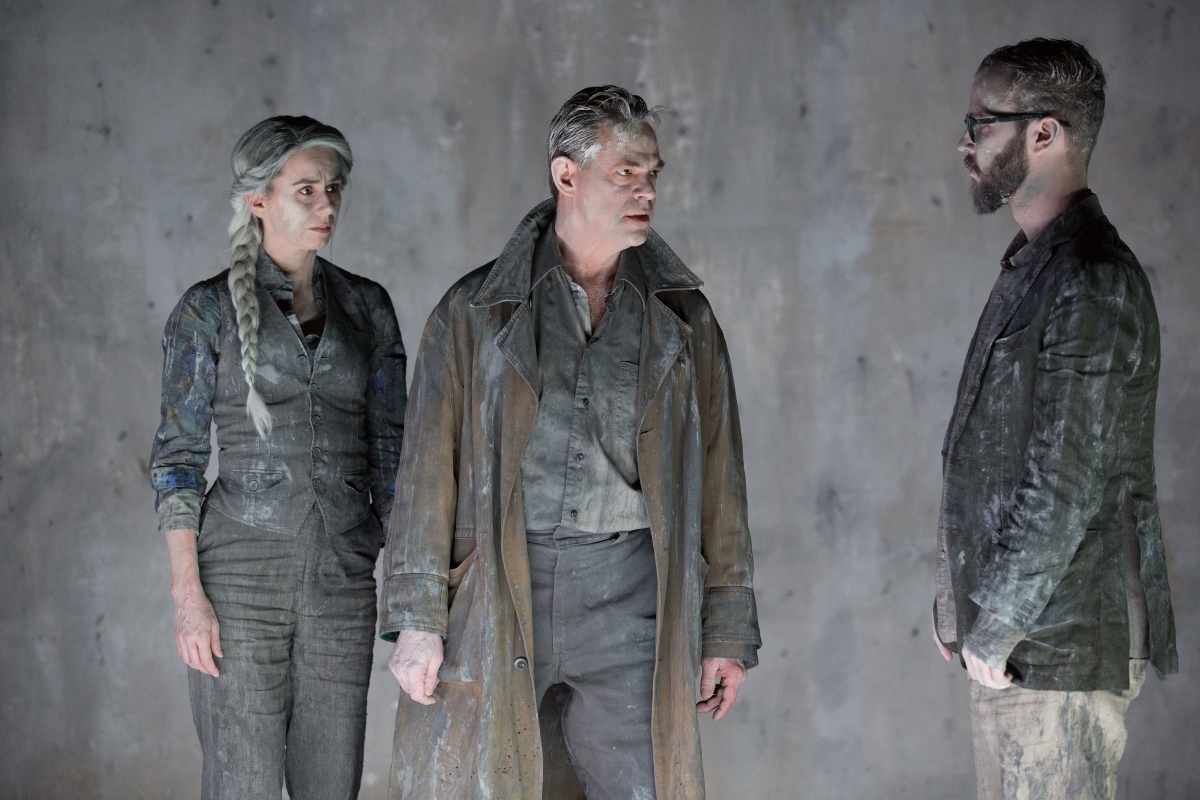 Soulpepper Theatre takes us on a turbulent, soul-wrenching homecoming journey in its production of Roland Schimmelpfennig’s Idomeneus, translated by David Tushingham, and directed by Alan Dilworth with assistance from Gregory Prest. Idomeneus is currently running in the Michael Young Theatre at the Young Centre in Toronto’s Distillery District.

The 10-year long Trojan War is over and Idomeneus, King of Crete (Stuart Hughes), is on his way home with his fleet of 80 ships; exhausted, battle-bruised and too long separated from loved ones. So close and so far, they are beset by a terrible storm that takes each ship down one by one. Aboard the last ship afloat, and facing certain death, Idomeneus strikes a bargain with Poseidon: he will sacrifice the first living thing he sees upon his arrival home. He is spared and returns home to the shores of Crete, his ship in tatters.

This is where our journey begins: in a shadow land of conscience, fate and storytelling, of lost souls and conflicting accounts. Which version of the story is true—and which is the version one can live with? Is the first living thing Idomeneus encounters his son Idamantes (Jakob Ehman)? Does he go through with the promised sacrifice? Has his wife Meda (Michelle Monteith) been unfaithful, sharing a lusty bed with an enraged fellow sovereign (Diego Matamoros) bent on punishing betrayal with revenge sex? Version upon version of the stories unfold. What is truth? What is rumour? What is fake news?

Combining storytelling, movement and choral work to create a collage of scenes and variations on scenes, the dark and eerie edge of this tale is highlighted with startling sound (Debashis Sinha) and lighting design, and haunting projected shadow images (Lorenzo Savoini), relieved by moments of dark comedy. The contemporary costuming (Gillian Gallow) is both muted and ghost-like; and the set, with its cracked stone wall and dark earth floor evokes both an ancient place and no place (Lorenzo Savoini).

And, whether Idomeneus goes through with the sacrifice of his son or not, will it have the same outcome? And will he have to pay with his own life regardless of which path he chooses?

Always loved this gorgeous and humungous chandelier @balzacscoffee in @distilleryto
All the pretty lights @distilleryto Light Festival.
After bringing a bouquet of roses to Leon Rooke and Fran Hill's holiday gathering and exhibit at the coach house, I was surprised with a gift of this painting: My Love Is Like A Red Red Rose. Leon wanted to add more red, so I just picked it up today.
Beautiful holiday hearth on the main floor at @7west_to #brunch
#HappyNewYear Wishing you all good things for 2020.