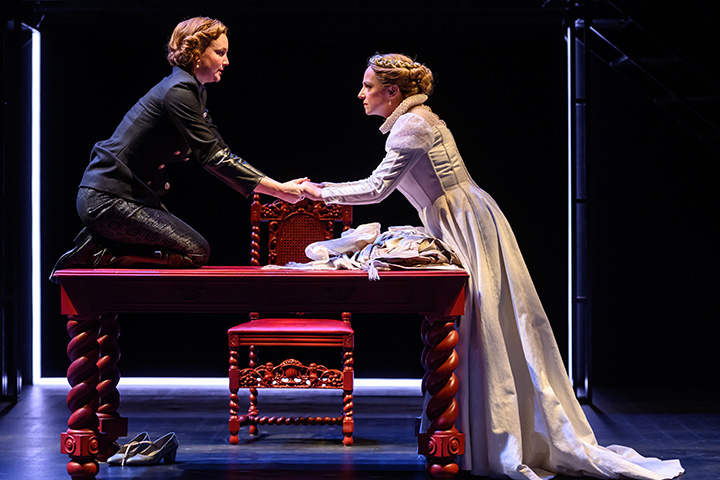 Soulpepper brings the Stratford Festival production of the final installment of Kate Hennig’s remarkable trilogy—exploring the Tudor period from the perspectives of its most famous and powerful women—to the Young Centre with the electric, razor-sharp Mother’s Daughter, directed by Alan Dilworth. Mary Tudor (aka Bloody Mary), who become the first female monarch of England, struggles with both inner and outer conflict—living in the shadow of her formidable, beloved mother Catalina (Catherine of Aragon), and up against her popular, cunning sister Bess (Elizabeth I) and young, naive cousin Lady Jane Grey to gain and maintain the crown during a great period of upheaval and uncertainty following her brother Edward’s death. Exploring mother/daughter relationships, and the nature of leadership and power, it’s an intensely compelling portrait of trust, alliance, betrayal and grit.

Teenaged King Edward VI has died, and has disinherited his sisters Mary (Shannon Taylor) and Bess (Jessica B. Hill), and—guided by John Dudley—named their 16-year-old cousin Lady Jane Grey (Andrea Rankin) as his successor; Jane just happens to be Dudley’s daughter-in-law and claims to have no desire for the crown. Bess and Mary are having none of it, and a three-way battle for the throne ensues, with nobles and common folk alike taking sides and declaring loyalties. Initially refusing to use violent means to get what she wants, Mary chooses to use her voice and the power of reason as a means to appeal to and win over her adversaries.

With early confrontations going her way, Mary wins the crown—and begins the hard work of strategizing her reign with the assistance of personal advisors Bassett (Beryl Bain) and Susan (Maria Vacratsis), with diplomat Simon (Gordon Patrick White) guiding her through protocol and procedure. Also in Mary’s corner is her deceased mother Catalina (Fiona Byrne), who—through Mary’s memory and inner voice—appears, urging a decisive, iron grip approach, particularly when it comes to dealing with adversaries and restoring the Catholic faith to England. Added to the mix in Mary’s deliberations is Catalina’s nemesis Anne Boleyn (Hill), Bess’s mother, who wielded power in her own visceral way, in direct opposition to Catalina (and Mary’s) more cerebral approach. And throughout all the fireworks and debates between her various advisors, Mary grapples with her own sense of self-doubt and confidence as she strives to come to terms with her newly acquired power and responsibility. All the while, dealing with physical pain, Mary clutches her lower abdomen throughout—highlighting the pressures of producing an heir in her late 30s, and foreshadowing the (likely) ovarian or uterine cancer that contributed to her death at 42 during a flu epidemic.

Stunning performances from this largely female cast. Taylor does an outstanding job with Mary’s complexity and inner conflict; gutsy, determined and ambitious, Mary wants to be a moderate ruler, but finds she must steal herself to best confront personal and national threats. Living in the shadow of her mother Catalina, Mary is also both haunted and dogged by an extremely complicated mother/daughter relationship; both longing for love and approval while fighting Catalina’s harsh judgment, and determined to do things her own way even as she navigates her own second guessing and conflicting advice from counsellors. Byrne is an imposing, regal presence as the imperious Catalina; constantly pushing Mary to be the best monarch she can be, Catalina is laser-focused and brutally honest—holding no punches as she advises her daughter.

Hill’s Bess exudes a cock-sure confidence and comfort in her own skin that Mary struggles to possess; exceedingly cunning and at ease with her power, Bess knows without a shadow of a doubt that she was meant to rule. Hill brings a fierce sensuality to the self-possessed Anne, making it easy to see the source of Bess’s passion and fire. Rankin’s sweet, naïve Jane stands in stark contrast to the ambitious Mary and Bess; a seeming innocent who professes no desire for the crown, Jane has been groomed for the throne—by a third mother figure who we don’t see here—and finds she must admit that maybe she does really want it after all.

Bain’s edgy, young spin master Bassett and Vacratsis’ measured, cautious veteran advisor Susan serve as perfect foils for each other—with Bassett representing Mary’s fight response and Susan the flight response. Rounding out Mary’s official council is the prim and proper diplomat Simon, who White infuses with a deadpan, stern schoolteacher-like countenance; the result is sometimes comic, but Simon also stands in for the male perspective here. Downplaying Mary, Bassett and Susan’s debates as “woman’s chatter”, Simon is a most reluctant and skeptical member of Mary’s inner circle. There is no precedent for a female monarch—and, like many men and even some women, Simon highly doubts that a woman is fit to rule.

The action is nicely supported by Lorenzo Savoini’s sharp, minimalistic set and stunning costumes, which combine a sense of the period with that of the 21st century; and complemented by Kimberly Purtell’s startling, edgy lighting design.

Winning hearts and minds, and reconciling the inner struggle between the kind of ruler one wants to be and the kind of ruler one needs to be. Difficult times require difficult decisions—and those in power must also do battle within themselves, even going against their own nature, to be the kind of leader they are required to be.

Mother’s Daughter continues at the Young Centre and must close on February 9; advance tickets available online or by calling the box office at 416-866-8666 or 1-888-898-1188. Get on those advance bookings to avoid disappointment.

In the meantime, check out the trailer:

Tracey Erin Smith and Soulo Theatre celebrated the 5th anniversary of the Soulo Theatre Festival, opening this year’s fest with an Opening Night Gala presentation of Savoy Howe’s Newsgirl. With direction and dramatury by Soulo Theatre A.D. Smith, Newsgirl ran for one night only at the Toronto Newsgirls Boxing Club in front of an enthusiastic, sold out house—and a standing ovation—last night. The fest continues at Red Sandcastle Theatre tonight and throughout the weekend.

When Savoy Howe moved away from her home in New Brunswick in the late 80s to study theatre in Hamilton and later move to Toronto, she had no way of foreseeing what was in store—and the journey that would bring her the sense of strength, determination and empowerment that she would go on to share with women and trans people.

This is the story of Newsgirl, Howe’s autobiographical solo show that takes her from a tomboy growing up on a Canadian Air Force base, to her coming out, to training as a boxer and later passing on her knowledge as a boxing coach, starting the first women’s and trans-friendly boxing gym in Canada: the Toronto Newsgirls Boxing Club. And, while it was a photo of a woman wearing boxing gloves that inspired Howe to take up the sport, it was a speed bag that made her fall in love with boxing.

Combining the physicality, strategy and philosophy of boxing with considerable stand-up and storytelling chops, Howe is an engaging, energetic and endearing performer. With Howe primarily telling her story from inside the boxing ring, the show is dynamically staged, moving her around the gym as she highlights discovery and work on the heavy bag and speed bag; and her rookie first entry into the ring is hilarious!

Newsgirls is a story of struggle, grit and a ‘don’t give up’ attitude that takes some rough, and sometimes violent, turns. Perseverance, a big heart and a curious, open mind—not to mention a hard-working, helping hand way of looking at life—make the wins and losses equal in value. Always learning, never backing down from a challenge, and enduring the deep-seated sexism and male aggression of this world, Howe is an inspiration. Newsgirl is a classic underdog makes good story. And it definitely packs a punch.

Grit, determination and a love affair with the speed bag in the funny, moving, inspiring Newsgirl.

Check out this great interview in VICE Sports with Savoy Howe on how she got into boxing, opened Newsgirls, and how she and the gym are empowering women and trans people. You can also follow the Toronto Newsgirls Boxing Club on Facebook.

Howe is in the process of launching a crowdfunding campaign to keep the gym alive and serving the community; stay tuned for details on how you can help.

Newsgirl was a one-night only performance, but no worries—there are lots more life-changing, life-affirming true stories to come tonight and this weekend at the fest, which includes solo shows and panel discussions. The Soulo Theatre Festival continues at Red Sandcastle Theatre till May 28; check out the full schedule and purchase advance tickets and get your festival pass.

Department of corrections: The original post for the show mentioned that Howe studied theatre in Toronto; it was actually Hamilton. The error has been corrected.