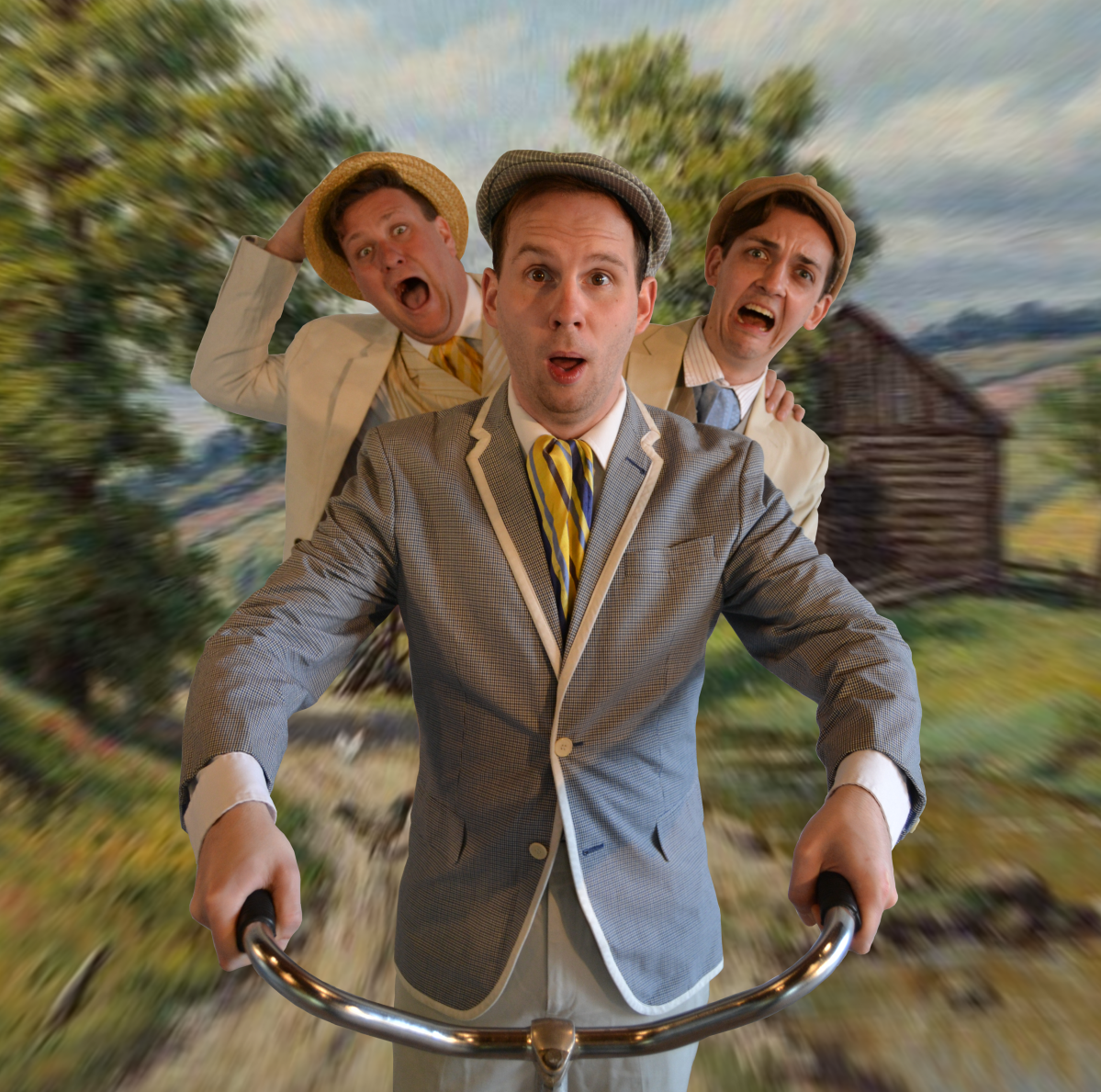 Pea Green Theatre Group is back with our favourite fun-loving Victorian man-boys in Mark Brownell’s hilarious, entertaining Three Men on a Bike, adapted from Jerome K. Jerome’s Three Men on the Bummel, On the Stage and Off and The Idle Thoughts of an Idle Fellow. Directed by Sue Miner, with musical arrangements/vocal coaching by J. Rigzin Tute, this time our intrepid travellers go on a bicycle tour of Germany—which you can experience from the safety of your seat in the Tarragon Theatre Mainspace.

Following the unprecedented success of his first book, Three Men in a Boat, idler and sometimes author Jay (Matt Pilipiak) is under pressure to produce a successful sophomore effort—by no means an easy task. He, his even more idle friend and roommate George (Victor Pokinko) and his other friend Harris (David DiFrancesco)—who’s now got a wife!—put their heads together and come up with a three-week bike tour of Germany. Their ultimate destination: the Black Forest.

Shenanigans and hilarity ensue, starting with convincing Harris’s wife to let him go; this followed by the acquisition of tandem and single rider bicycles and some dodgy DIY bike repair. Jay hires a yacht from an ancient, hump-backed man down at the docks (Pokinko); then the agreeable but vague skipper (DiFrancesco) can’t seem to find the right wind to set sail upon. After waiting a week, they book passage on a steamer and finally arrive in Germany, where they individually run afoul of the local constabulary; get lost in the Black Forest; and encounter Montmorency’s (Jay’s terrier, who had to stay home) evil German twin.

Top notch performances from this outrageously funny and talented trio, who conjure up scenes almost exclusively with movement, gesture, a cappella harmonies and hysterical facial expression—plus Nina Okens’ smart period costumes. Pilipiak’s Jay is an amusingly arrogant wordsmith, often breaking the fourth wall to address us as scenes shift, their adventure broken up into chapters. Pokinko is a slapdash delight as the wry-witted bachelor George, who enjoys doing as little as possible. And DiFrancesco is endearingly dense as the somewhat dull-witted but affable and well-meaning Harris.

Not to worry, it all works out in the end—and it’s a jolly good ride.

Three Men on a Bike continues in the Tarragon Theatre Mainspace until July 14; check the show page for exact dates/times and advance tickets. Advance booking strongly recommended; audiences love these guys and the house was packed full last night.

Moleman Productions presents a multimedia, multidisciplinary work in progress with its SummerWorks production of The Red Horse is Leaving; running for three performances in the Toronto Media Arts Centre Main Gallery. Written and co-directed by Erika Batdorf, with excerpts from artist Thaya Whitten’s journals and performance talks, and co-directed and choreographed by Kate Digby, the piece takes us on a thoughtful, moving journey into the playful, pensive and tormented mind of Batdorf’s performance artist/painter mother. I caught the closing performance, along with a sold out house, last night.

Part lecture, part performance art, part fly-on-the-wall experience, the audience is invited into Whitten’s (Erika Batdorf) studio as she faces off with a blank white sheet of Masonite; struggling to manifest her vision, her concept, in colours and brush strokes on a two-dimensional surface. All the while, a Gargoyle (Zoe Sweet) watches, climbing cat-like over tables and chairs—and even curling itself around Thaya—largely unseen but felt; its glowing, lit spine flashing and changing colour along with her breath and pulse.

Cerebral and visceral at the same time, The Red Horse is Leaving also addresses the issues of meaning, ethics, outreach and economics as they relate to art; and the changing landscape of art and artists, and how their work is perceived and received. Back in the 60s, performance art was the big new thing; controversial, revolutionary and exciting. Not so much anymore. Referencing “the red horse”—the subject of Thaya’s work in progress—we get the impression that it represents her muse, her inspiration, her passion. And it’s eluding her.

Beautiful performances from Sweet and Batdorf in this profoundly moving, thought-provoking two-hander. Batdorf’s Thaya is an artist with a curious, sharp and tormented mind; and a playful, tortured soul. Longing for inspiration and connection with her muse and her work, as well as her audience, Thaya struggles to reach out—to the white space before her and the world around her. Sweet is both menacing and adorable as the Gargoyle; moving with precision and grace under and over furniture, and coiling around the artist. Both bird-like and cat-like, it nudges and prods Thaya, offering brushes and even sharing a snack.

Inside Thaya’s secret heart, like her, we realize that longing can be a dangerous and unfulfilling thing—but it’s part of our human nature to strive and struggle to find meaning in our work, our world and ourselves.

This was the final SummerWorks performance of The Red Horse is Leaving; look out for the Toronto premier in the Rendezvous with Madness festival Oct 13 – 21.

Department of corrections: The original post had the cast credits reversed; this has been corrected.

Cavalcade follows the lives of two intertwined families, the Marryots and their servants the Bridges, as they live through significant historical events, including the Boer War, the death of Queen Victoria, the sinking of the Titanic and WWI. From New Year’s Eve 1899 to the same night in 1929 and into New Year’s day 1930, the story is told through scenes of daily life and musical numbers.

As Jane Marryot, Scriven anchors the show with a lovely combination of game stiff upper lip and moving emotional response to events that impact her family and country. And we see the kids grow up and move through various life milestones: the Marryots’ sons Edward (the dutiful elder son, played with a twinkle in the eye by Nyhuus) and Joseph (the younger, impetuous son, played with Puckish charm by MacKenzie), and the Bridges’ daughter Fanny (DeGraves, who brings a lovely arc from the wide-eyed adorable child to the slinky nightclub performer).

There are some great moments of comic relief, notably at a night at the theatre in a play within the play called Mirabelle, featuring some fine musical antics from Matheson, Penner, Albino and Jeffels (featuring stand-out vocals from Matheson and Albino); and some seaside entertainment from Boyce, Penner (who also plays a mean ukulele) and Runeckles (who also supplies piano accompaniment throughout and does a delightful tap dance break). Musical moments are capped off by a lovely rendition of Coward’s “Twentieth Century Blues” by DeGraves in a wistful and world-weary welcome to 1930, leading into a chaotic epilogue that fast-forwards through the remainder of an astoundingly volatile, wondrous and quixotic century.

As we travel through time in Britain’s history, from the Victorian to the Edwardian age – and a fast-forward Epilogue finale through the remainder 20th century – we see how the major events of the age test her people’s resilience and fortitude. Perhaps more importantly, there’s a loss of innocence; the sometimes violent changes that occur as the world grows into more of a global village, and the ever quickening pace of life changes people irrevocably. And one can’t help but look back with fondness on – what looks like from the present point of view – a simpler, gentler time.

With shouts to set and costume designer Brandon Kleiman, especially for the stunning bejeweled purple frocks are stunning; lighting designer Siobhan Sleath for some lovely atmospheric effects; and stage manager Debbie Read for holding it all together.

A trip through time with family, country and loss of innocence in the charming, poignant Cavalcade.

Cavalcade runs at the Young Centre in the Tank House Theatre space until Nov 19; get your advance tix online or by calling the box office at 416-866-8666. It’s a great chance to see some exciting emerging talent before they head out into their careers.

You can also keep up with George Brown Theatre’s class of 2017 on Twitter.