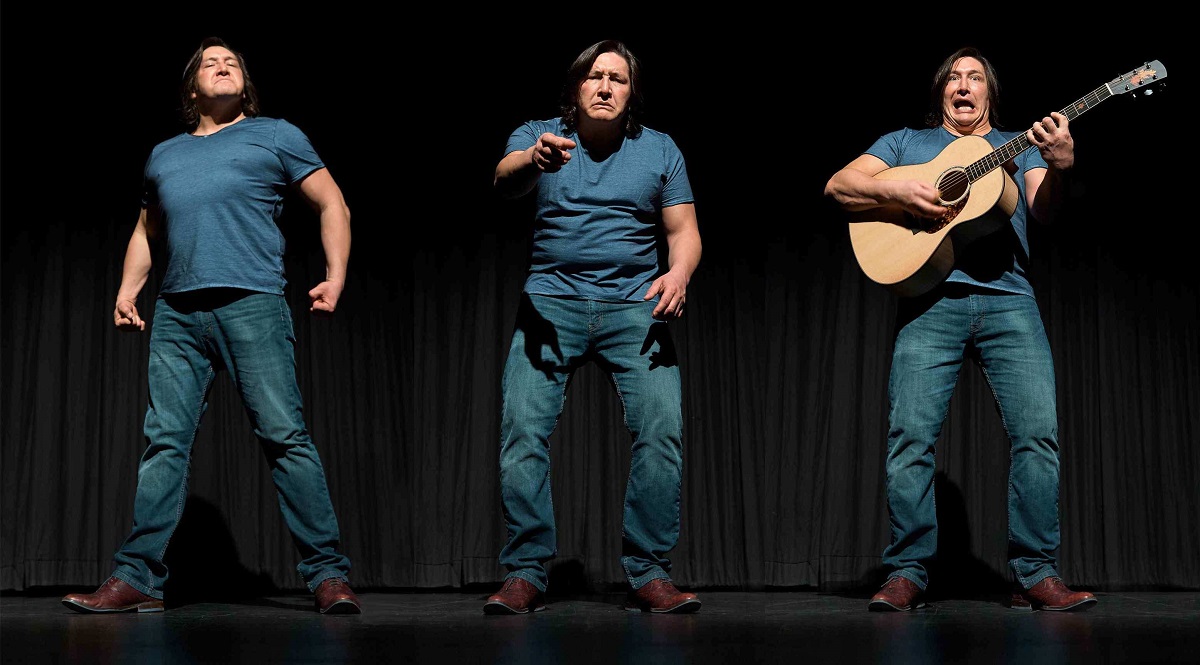 Métis Mutt began as an eight-minute piece at NextFest 2001, inspired by teacher Ken Brown and the vocal masque style of solo show. Since then, it’s grown into a 90-minute feature, was a hit at Edmonton Fringe, subsequently adapted for high school audiences, and has toured Canada and New Zealand. The Native Earth production marks the show’s Toronto premiere.

A semi-autobiographical piece of storytelling that combines stand-up, music, monologue and multiple character vignettes, Métis Mutt is part memoir, part spirit journey. Searching for his authentic voice, a young Métis (have Indigenous, half white) man struggles with centuries-old cultural stereotypes and internalized racism as he finds his way out of a cycle of violence and self-destruction to healing and forgiveness.

Heartbreaking flashbacks to the young man’s childhood reveal a sweet boy torn between protecting his mother and younger brother, and running and hiding from his father’s drunken outbursts. A favourite of his father and thus escaping the beatings, he beats himself up for his failure to act and for being a coward. Later on, having moved away with his mother and brother, his conflicting feelings emerge in letters to his dad—love and fear, longing and confusion.

As a young man, he discovers a talent for stand-up and music, and finds chosen family on the road with his hypnotist performer friend Mark, and is later drawn to theatre school. And when years-old buried emotions erupt to the surface, he self-medicates with drugs and alcohol, and cuts himself, to numb the pain.

His thoughts turn often to his father, a troubled man who struggled with demons of his own only to find them emerging from the bottom of a bottle to turn on his family. And the death of his father becomes a turning point. Not wanting to go down that same road, the young man finds his way back to himself, finding self-awareness in his struggle for identity and self-acceptance, and forgiveness for his father.

An engaging and versatile performer, Elter deftly shifts from comedy to tragedy throughout—a hilarious and stark reminder that pain comes from laughter and laughter comes from pain. Setting the tone off the top of the show with a set of stand-up, what starts off as a good-natured, self-deprecating series of stereotypical riffs on “Indians” becomes a biting commentary on hundreds of years of oppression and racism as joking around turns to rage, and entertainment becomes condemnation. The pain is turned inside out so others can see and understand. The title Métis Mutt is both a source of laughter and pain, poking fun at identity even as it grieves the damage of racist name-calling.

From cheeky stand-up and bawdy music bits, to poignant characterizations and startling scenes of violence, Elter’s storytelling is genuine, thought-provoking and frank—finding the light and the dark spots, and ultimately unearthing hope and redemption.

With shouts to the design team: Tessa Stamp (set and lights; she’s also the production’s stage manager), T. Erin Gruber (projection) and Aaron Macri (sound). Design elements are particularly effective during the young man’s mystic healing experience, when he’s taken to a native healer after traditional medicine doesn’t help him. The semi-circle of stones that delineates the playing space, and the semi-circular dream catcher backdrop that serves as a projection screen, create a sacred space that both honours and evokes the young man’s Indigenous heritage.

Fathers and sons on a journey of growth and forgiveness in the entertaining, deeply moving Métis Mutt.

Get yourself out to the Aki Studio to see Métis Mutt, running to February 5; get your ticket info and online tix here.