Theatre Mischief gives us a spine-tingling, darkly funny turn—and a unique look at death, loneliness, fear and how people live together—in its SummerWorks production of Jessica Moss’s Hitchcock-inspired murder mystery comedy A Girl Lives Alone. Directed by Moss and the company, the show is currently running in the Theatre Centre’s Franco Boni Theatre.

New to her NYC apartment, Marion (Samantha Madely) returns home one night to find her fellow tenants assembled outside, their building taped off as a crime scene. A young woman in the building was murdered, at home in her apartment, the unknown perpetrator still at large. A murder mystery, Hitchcock fan obsessed with her ex-boyfriend’s classic murder mystery-inspired radio show podcast, Marion becomes hell-bent on investigating her neighbours in hopes of discovering the murderer. Gradually, she gets to know her fellow tenants: the opinionated, judgemental and fastidious Alma (Anita La Selva); the harried landlord Murray (Alexander Thomas); boyfriend/girlfriend pair the volatile Stewart (Aldrin Bundoc) and chatty Kim (Asha Vijayasingham); the nervous, quirky Janet (Jessica Moss); and the creepy, enigmatic Foley Artist upstairs (Andrew Musselman). Watching from the sidelines is the bubbly actress Grace (Tiffany Deobald), the murder victim. Grace lived alone.

The murder is a catalyst for a variety of shifting dynamics within the building; heightening suspicions, and driving self-advocacy and the realization that the tenants don’t particularly know each other that well. Their previous perceptions of safety and comfort profoundly shaken, no one in the building is the same. We see the dark and tender sides of the neighbours as the story unfolds; and everyone has their own way of coping. Janet binge-watches Friends on Netflix while others enjoy Law & Order SVU, Alma calls Murray out on a long-neglected repair to her place and Marion becomes Nancy Drew. Both terrified and fascinated by the strange Foley Artist who lives directly above her, Marion can’t stay away as he shows her the tricks of his trade, at her request, up in his place.

Outstanding work from the ensemble, riding a fine edge of comedy and psychothriller in this gripping, darkly funny tale of mystery, and dangers real and imagined. Noises in the dark—the young couple sexing or fighting, the Foley Artist at work, someone coming upon you suddenly—all take on new meaning and put everyone on edge. And some new, unexpected alliances are forged as well. What do you need to feel safe and comfortable in your own home? And how do women who live alone mitigate the risk? And how do you cope when the unthinkable happens so close to home? 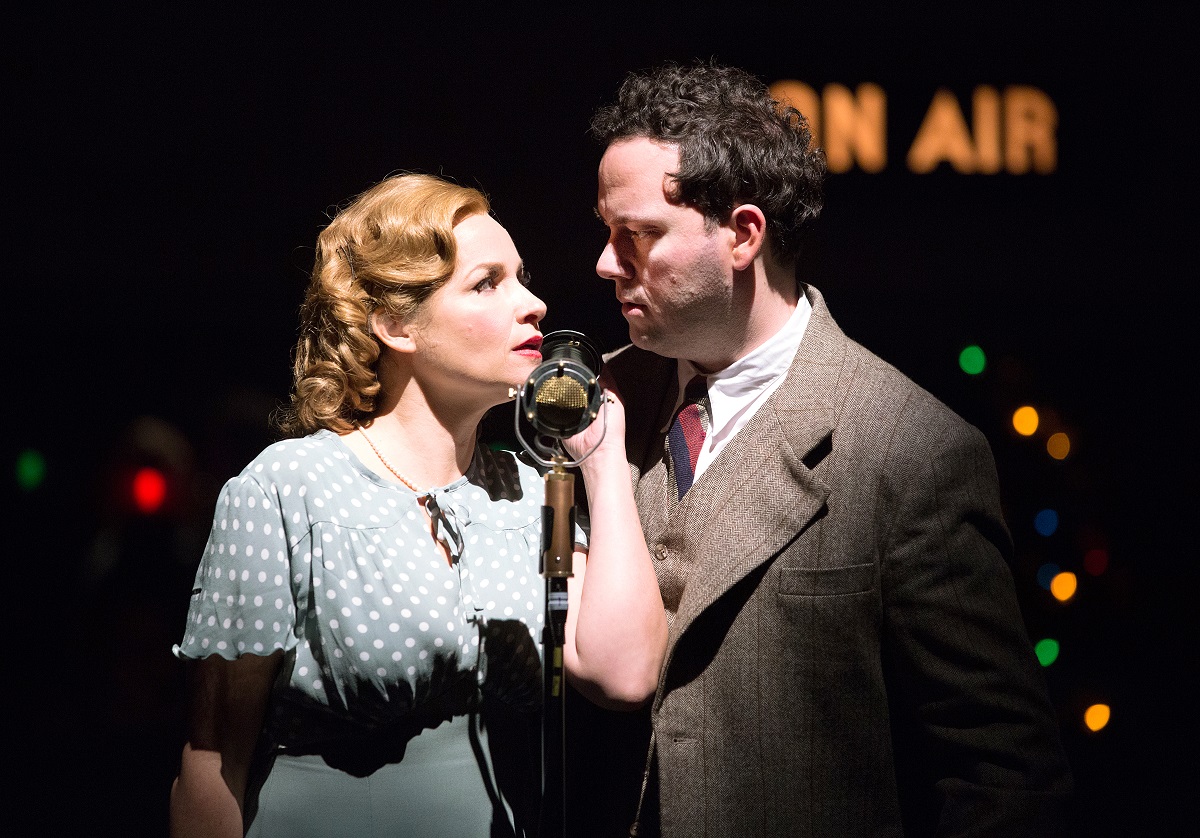 Soulpepper added an extra bit of cheer to its holiday programming this year with its production of Philip Grecian’s adaptation of Frank Capra’s It’s A Wonderful Life, directed by Soulpepper Artistic Director Albert Schultz, assisted by Mumbi Tindyebwa Otu, and opening to a packed house at the Bluma Appel Theatre in the St. Lawrence Centre last night.

Set as a 1940s radio play performed on stage—with the actors playing actors playing characters in the story—this version of It’s A Wonderful Life gives us all the favourite moments of the film version, including the dialogue, with the added fun of a behind-the-scenes look at some fabulous Foley (sound effects) work, designed by John Gzowski. And last night, we had the added treat of a charming performance of “We Wish You a Merry Christmas” from the Dixon Hall Music School children’s choir.

George Bailey (Gregory Prest) has spent his entire life helping others in his small town. As a kid (Richie Lawrence) he saved his kid brother Harry (Christef Desir) and after school employer, pharmacist Mr. Gower (Diego Matamoros). And as an adult, he sacrificed college and travel to save the family building and loan business from falling into the hands of the corrupt and wealthy Mr. Potter (Matamoros). All so the hard-working, struggling folks of Bedford Falls could have a fair chance at a decent home.

Challenges aside, he’s got a pretty good life, with a lovely, supportive wife Mary (Raquel Duffy) and four sweet kids (Daniel Mousseau, Thea Lapham, Michelle Monteith and Richie Lawrence). Until one Christmas Eve Day, a banking mistake made by his absent-minded uncle Billy (William Webster) threatens to cost him everything. And in his most desperate hour, his guardian angel Clarence (Oliver Dennis) appears and sets out to show him what the world would have been like if he’d never been born.

This production truly captures the spirit of this beloved holiday classic, and then some. In true radio broadcast style, the show features live commercial spots shouting out Soulpepper’s corporate sponsors and other holiday program offering, with live piano accompaniment (James Smith of Chasse-Galerie). But the biggest fun of all has to be the Foley artistry, featuring Christef Desir, Daniel Mousseau and Marcel Stewart as the soundmen (operating a neat assortment of sound-making props and gadgets, and playing multiple characters as well); with the entire ensemble creating various sound effects vocally. And at the end of Act I, aptly staged during George and Mary’s honeymoon scene, the stage goes to black as the scene continues, with lights on the vintage radio down stage left—giving us a taste of the radio drama experience.

Exceptional work from this cast. Stand-outs include Prest, who brings a good-natured authenticity to George Bailey, an everyman performing everyday acts of heroism; there’s really nice chemistry with Duffy’s Mary, George’s warm but feisty perfect match. Matamoros delivers some delicious voice work, from the velvet smooth tones of the announcer, to the gravel-voiced Mr. Gower, to the malevolent, grasping villain Mr. Potter. And Dennis is adorably quaint as the underdog Angel Second Class Clarence, determined to earn his wings.

Monteith brings some great vocal chops and range, going from the slinky town party girl Violet, to the too cute for words Zuzu (George’s youngest daughter, famous for Zuzu’s petals); and Mousseau is a delight as Martini, the owner of one of the town’s favourite restaurants. And shouts to kid actors Lapham (Young Mary and George’s daughter Janie) and Lawrence (Young George and George’s son Tommy).

It’s A Wonderful Life continues the Bluma Appel Theatre—and, good news, it’s been extended to December 31. Get your advance tix online or by calling the box office at 416-866-8666.

Check out the behind-the-scenes video for a peek at the fun in store:

And while you’re at it, check out some of Soulpepper’s other holiday treats, including its annual production of A Christmas Carol and the Family Festival programming. Here’s hoping that It’s A Wonderful Life becomes an additional holiday tradition at Soulpepper.

A wonderful evening of fun and festivity at the Papermill Theatre last night at Alexander Showcase Theatre’s (AST) opening night of their adaptation of Charles Dickens’ A Christmas Carol, a special wine and dine gala that featured a very tasty and highly digestible pre-show Christmas dinner. Directed by Vincenzo Sestito, who adapted the script with Gwyneth Sestito, this version of the holiday favourite is set as a 1940s radio play within a play, much like AST’s 2012 production of It’s A Wonderful Life.

The cast does an amazing job of juggling multiple characters, including playing actors who are playing characters in a radio play of A Christmas Carol. Seth Mukamal’s (as actor Felix Underhill) Scrooge would do Alistair Sim proud, a remarkable balance of curmudgeon and lost boy. Andrea Brown (as actor Amelia Copeland) and Matthew Payne (as actor Allan Flynn) do a great job as the co-narrators, with Payne giving a jolly performance as Scrooge’s nephew Fred, and Brown hilarious as charwoman Mrs. Dilbur, and supportive and no-nonsense as Mrs. Cratchit. The two have some especially lovely moments behind the scenes, as we witness Copeland and Flynn’s burgeoning romance. Tayves Fiddis (as actor Jack Smythe) does a nice job playing Cratchit and young Scrooge, and Michelle Berube is a flirty firecracker as the talented young Foley Artist Jayne Whitley. As their respective actor characters, these two share some adorable offstage (and on) flirtation, which doesn’t get past the watchful eye of Head Foley Artist Beulah Higgins, played with a good-natured den mother vibe by Deborah Mills.

David McEachern’s beautiful bass baritone is perfect for the Announcer, and goes from jovial to menacing as the Ghost of Christmas Present. Steve Kyriacopoulos does a great comic turn as the put-upon Station Manager Gordon Smithers, and gives us a kind and ethereal Ghost of Christmas Past. Nice work from James Phelan, as the morose and penitent Ghost of Jacob Marley, and the comically opportunistic Undertaker; and Eugene Fong-Dere is both jovial and funny as the chain smoking actor Johnny Choi, who plays Mr. Fezziwig, among others. Nina Mason (young Scrooge’s sweetheart Belle, the Laundress, and the Boy who Scrooge sends to purchase the goose for the Cratchits) and Anne-Marie Krytiuk (Scrooge’s sister Fan, Cratchit’s kids Martha and Peter) show some very impressive chops with a wide variety of characterizations, both male and female. And young Michael Speciale is a puckish little rascal and a fine performer as actor Mitchell Rooney, who plays Tiny Tim, among others.

The charm of this adaptation lies in the nostalgic radio play production setting, with its period music and holiday tunes, sound effects work (Mills and Berube do a stand-up job with the equipment – and the contraption Berube uses to create the audio representation of the Ghost of Christmas Future is eerily fascinating) – and, especially, the behind-the-scenes rapport of the radio play actors, with all the collegial teasing, hamming it up, romantic intrigue and general shenanigans one would expect from a group of actors.
Adding to the fun of the production is a series of live 1940s-style jingles for the show’s sponsors, with music and lyrics (lyrics by Gwyneth Sestito for The Pilot Tavern) by Robby Burko, who plays the radio show’s pianist, and belted out in true Andrews Sisters style by Brown, Krytiuk and Mason.

Additional music for the opening performance was supplied by special guests, including Supertonic Quartet, who delighted the crowd with some tunes during dinner, as well as a guest number during a music break in the play (they’ll be returning on Nov 29 & Dec 7). And Supertonic member Patrick Brown and cast member Nina Mason (who played the actors playing George and Mary Bailey in AST’s production of It’s A Wonderful Life) performed a fabulous duet of “Baby, It’s Cold Outside” during the show’s music break. Katey Morley is set to perform at the Dec 6 show.

Think it’s too early for a holiday treat? Bah, humbug! Alexander Showcase Theatre’s A Christmas Carol is a delightful way to kick off the holiday season – for kids of all ages.

A Christmas Carol continues its run at the Papermill Theatre until Dec 7. Up next for AST: Sweeney Todd at Al Green Theatre (April 30 – May 10, 2015).

Hey kids! More big fun coming at a one night only reading of Siobhán Dungan’s radio comedy The Receptionist, where eight actors (including the playwright) play approximately 120 different characters – and I’m one of those actors!

Here’s what playwright/actor Siobhán Dungan’ has to say about this big wacky fun time:

It’s based on a true story

I have been working on this play since 1999

The time has come.

I have a venue.

I have 7 wonderful actors and one brilliant musician.

PLEASE come to attend the one-night performance (and recording)

I promise you will laugh at least 44 times.

Bring 2 or 3 friends for 2 hours of laughter.