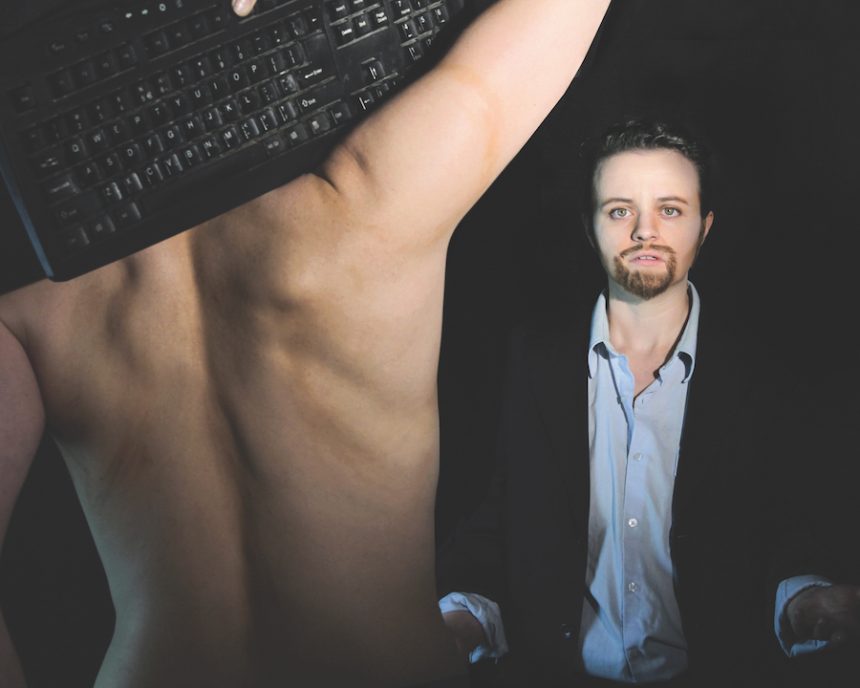 Lester Trips Theatre presents a provocative multimedia workshop production of the hilarious, disturbing, eye-opening Safe and Sorry. Co-created and performed by Lauren Gillis and Alaine Hutton, co-performed and choreographed by Angela Blumberg, and directed by Chelsea Dab Hilke, we’re invited into the world of Keith Much, who leads workshops aimed at helping men with their dating and pick-up game. His process, a combination of pick-up artistry and consent culture, amasses a lot of fans; it also finds detractors—and Keith begins to see the darker side of male desire as he reads the comments on his message board. Safe and Sorry had its second performance in the Franco Boni Theatre at The Theatre Centre last night.

The audience becomes part of a Keith Much (Lauren Gillis) dating workshop, where our affable facilitator mixes up quick lecture bites with Q&A and one-on-one sessions on stage with a variety of participants (Alaine Hutton)—from overly enthusiastic bro’s like Mike to painfully shy dudes like Stu. His unorthodox methods make for hilarious, but instructive moments, as he teaches men about respectful approaches, consent, body language, verbal and non-verbal cues, personal hygiene and kissing.

Keith’s helpful and progressive teachings aim to make sure that both the man and woman are having good, safe, sexy fun times; but as his popularity grows and his message board gets more traffic, so too do the darker responses from the toxic masculinity side of the straight male spectrum. And he comes face to face with the dark side when an aggressive, frustrated participant disrupts a workshop Q&A, forcing him to call a break have a sit-down with the guy. This man wants to find a wife, settle down and have a family, but finds women only want to party and will dump a good guy like him for the next best thing. Angered and entitled, he believed that his excellent socioeconomic status would make a difference, but it isn’t; and he eventually identifies as incel. The toxic responses online begin to turn on Keith, as some of these men begin to question his credibility.

In between workshop scenes, we see a trailer for a movie (film design by Peter Demas, with lighting and video design by Wesley McKenzie, nicely supported by Steven Conway’s music arrangement/performance) in which four men (played by Gillis and Hutton), unknown to each other, have been abducted and chained up in a concrete bunker. As they try to figure out why they’ve been taken, they realize what they each have in common: they’ve all committed rape—and the psychological thriller scenario implies that a woman (or group of women) is out for revenge. And while the men in the trailer are forced to confront what they’ve done, women are placed in the position of being a threat, the enemy—this becomes a parallel of sorts to the dark side views that Keith sees emerging in his message board comments.

Excellent work from Gillis and Hutton in this multimedia, multi-layered trip into the male psyche from a consent culture perspective. Gillis is amiable, warm and confident as Keith; knowledgeable, professional and helpful, Keith creates a safe, supportive environment for men to share their issues, work out problems and improve their dating game. Hutton’s multi-tasking role as the various workshop participants ranges from the hilarious and goofy, to the extremely awkward and shy, to the everyday, to the angry, entitled and menacing. The movie trailer adds an interesting level to this exploration of male desire and toxic masculinity, but it’s the interaction between Keith and the men, especially the incel guy, that makes for the most powerful and compelling moments. Looking forward to seeing the evolution of this timely, thought-provoking piece; part two of Safe and Sorry is coming Spring 2020.

Safe & Sorry has one more performance in the Franco Boni Theatre at the Theatre Centre: August 16 at 5:00 p.m. Tickets available online or in person at the box office; it’s a very short three-show run, so advance booking or early arrival at the venue is recommended. 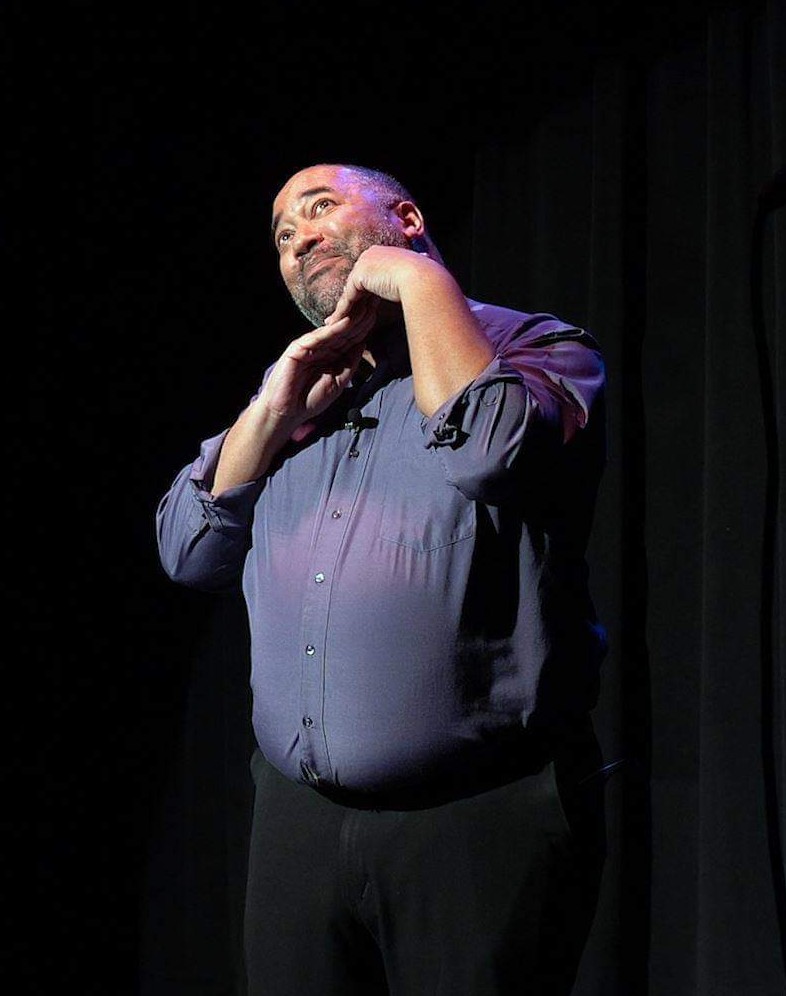 The Velvet Duke faces off with our inner demons in Velvet Wells’ Personal Demon Hunter, running in the back room on the main floor at the Imperial Pub. Part self-help workshop, part stand-up and all heart, personal storytelling, improv and music combine to create a casual, open-minded space where audience members are gently invited to share their personal demons.

Motivational speaker Velvet Duke (Wells) welcomes us into the space, a workshop designed to address our inner demons–and also, as his puppet friends suggest, our angels. Diving into family history, lived experience and the ongoing inner voice we all possess, Duke shares his story, through anecdote and music—accompanied by Alan Val, Wells’ partner in the band OverDude, on electric guitar, doing some musical improving; and stage manager Alan Leightizer on laptop—and invites us to share ours.

Wells is a totally relatable and approachable presence, finding common ground as he shares personal stories that resonate; and ever so gently inviting consensual audience participation. His ultimate message: You are enough and you don’t need growth to be a person of value because you already are a person of value.

Father issues, self-doubt, unhealthy family dynamics, imposter syndrome, toxic workplaces—the space and its occupants are open-minded and open-hearted during the sharing. And saying it out loud, naming the demons, is a good step toward exorcising them. Angels and demons in our everyday lives—around us and within us—our outer and inner voices of positivity and negativity. Wells encourages us to push those negative influences and voices aside, and find and keep positive connections—whether it’s on stage behind a microphone or at our jobs, wherever.

Person Demon Hunter continues at the Imperial Pub for four more performances: July 11-13 at 8:00 and July 13 at 3:00; check the show page for advance tickets.

Wells and Leightizer are also cast members of The Dandies, who rock Star Trek-themed improv in Holodeck Follies.

There is a buzz of excitement and anticipation, a festive feeling. Those of us among the audience who arrived early had been listening in on a final rehearsal, taking in the lush harmonies and powerful lyrics as we waited in the hallway. And when we enter the space, we are welcomed, offered something to drink. It’s like we’re coming into someone’s home—and we are.

We are in Studio 317 at 9 Trinity Street in the Distillery District, home to The Watah Theatre. And we are about to witness the evolution of Part Three of d’bi.young anitafrika’s Orisha Trilogy: Lukumi, a dub opera that began as Bleeders in a workshop production at the Theatre Centre during SummerWorks 2016. The revised, retitled piece has been mounted for three staged readings—and last night was opening night.

I saw the 2016 SummerWorks production, back when it was called Bleeders. Anitafrika refers to the piece as an “experiment” that combines dub opera and African traditions of choral work. Emerging actors were paired up with more experienced actors, creating a mentorship bond, and the cast was given space to experiment with characterizations; for the reading workshop, each character is presented in duet, a miniature chorus of two actors. The script was reworked for the reading event, to fill in gaps that would otherwise be covered by staging/action, with anitafrika acting as both narrator and conductor.

Most of the original script is still there: Lukumi is a hero’s journey in a futuristic post-apocalyptic dystopia following a nuclear disaster at the Pickering nuclear plant—an event that has left mankind sterile, but for a special one, the Lukumi. Sent off by a council of black womxn* to seek the Ancestor Tree in the hopes of finding what humans have forgotten about their role in creation, Lukumi embarks on a warrior’s vision quest into the underworld.

Guided by the teachings and principles of eight animal guides, she finds what she is looking for and returns home—but perhaps too late. The One World Army, seeking fertile women to swell their ranks to continue the 1,000-years War, is banging on the door. The situation is dire and many of her friends sacrifice their lives—but, having learned humility and accepting responsibility for mankind’s destruction of the planet, Lukumi has within her the seed of hope.

The most remarkable revision is the prologue, with the addition of an all too familiar voiceover—the “America first” portion of Donald Trump’s inauguration speech—which puts forth an “us first,” isolationist philosophy. It is a chilling foundation for what is to come, seguing into a scene of protest over the rape of the land and the poisoning of the water—and, in particular, the unsafe proximity of nuclear power plants to residential areas. The performance features stand-out vocal solos from Nubyanluv (Ancestor Tree) and Garrick (Elephant); once again, Garrick’s “Rest in Peace, My Friends” brought tears to my eyes—as did the epilogue “Black Lives Matter,” where the entire cast brings us back to 2016 in a stark reminder of ongoing social inequality and the oppressive abuse of power (which animal guide Lion warned Lukumi against).

During the post-reading talkback, as the cast introduced themselves, a common thread for their experience of this work—and working with Watah Theatre—emerged: they felt they were held in a space of mutual respect, and in the spirit of creative experimentation and collaboration. The Artists-in-Residence have been working in relative solitude, each crafting a solo piece, and those who have spent a most of their emerging careers working alone marvelled at the collective experience. There is a deep sense of gratitude, family and ownership in this oasis of creativity and support.

Anitafrika and The Watah Theatre foster a sense of community and outreach, emphasizing the desire to be present, and show up both in life and in the work they undertake. It is an inclusive, embracing space, where artists are invited to come as they are, and learn and stretch. It is a community of creativity, sharing and mentorship that creates artists who are also leaders and activists. Please consider supporting The Watah Theatre by contributing to their GoFundMe campaign.

With shouts to Stage Manager Samson Brown and Artistic Producer Brett Haynes—it does, after all, take a village to mount such an epic work.

Relevant, urgent, hopeful—the powerful, resonant evolution of Bleeders in Lukumi. I look forward to seeing where this production goes next.

The Lukumi workshop reading has two more performances at The Watah Theatre’s space (9 Trinity Street, Studio 317): today (Saturday) at 8pm and Sunday at 2pm; it’s an intimate space and a truly compelling show, so get your tix in advance. In the meantime, check out the trailer for Lukumi:

* This spelling of “woman” is the preference of the playwright.