Visited the Young Centre twice in the past 24 hours: last night for Soulpepper’s production of The Fantasticks and today for George Brown Theatre School’s second year period study performance.

The Fantasticks – in its current form – is only slightly older than I am. And I’d never seen it before; nor was I familiar with the plot. I only knew two of the songs: Try to Remember and They Were You; the latter I learned while at George Brown Theatre School.

It’s a lovely, sweet and magical show – and director Joseph Ziegler’s cast is  up for it. Soulpepper AD Albert Schultz (the narrator/El Gallo) and Derek   Boyes (Mute) set the stage for the story of love and discovery. Jeff Lillico and Krystin Pellerin are adorable as the young lovers, set up via a false  family feud by their fathers, played by Michael Hanrahan and William Webster. Scene-stealing props to Oliver Dennis and Michael Simpson as the travelling actors. Loads of fun – go see this: see soulpepper.ca

Today, George Brown Theatre School’s second year class had its annual trial by fire – this time, with Restoration plays. Being a grad of the school, as well as an initiate of said trial (my class performed the first period study at the school – Elizabethan and Jacobean in 1988), I was especially interested to see this year’s class as Lady Windermere’s Fan castmate (and fellow Johnny Depp b’day sharing gal) Tennille Read is in the second year class.

I was only able to stay for three-quarters of the performance. Period study is serious business – and has gone from a six-hour show to a full-day affair, complete with morning and afternoon coffee breaks, and a lunch break. Directed by Jeannette Lambermont-Morey and Sarah Dodd (the latter, I believe is a grad as well), this is a class to watch out for. And from adorable maid to sexy and passionate Cleopatra, Tennille was amazing. A thoroughly enjoyable day of theatre. And they only perform this once, otherwise, I’d tell ya to go see this too.

On the upside, the third year class does a full season of shows – and they share the Young Centre with Soulpepper, usually playing in the Tankhouse Theatre space. Check them out sometime too.

There’s a lot that goes unsaid in this film – and the audience can glean much from the characters’ silences: the looks, the body language and, especially, the flashbacks into local cop Walter’s (Stormare) violent past. For instance, Allin – who plays the murdered young woman’s mother – gives an extremely moving performance with very few lines. In fact, in the identification scene at the morgue, she has no lines at all – but manages to convey a mother’s denial, disbelief and anguish at seeing her daughter as the sheet is lifted from the body on the chrome table.

Go see this movie – it’s playing at the Royal.

Happy to be having a three-day weekend – spending time with friends and family, and looking forward to new creative horizons. And, hell, just vegging.

Now, if we could only get some long weekends happening in November and June…

Getting busy at Alumnae again, with New Ideas fast approaching, and – as always – trying to get out to cover Alum pals doing other theatre work. Check out the latest happenings on the Alumnae blog: http://www.alumnaetheatre.wordpress.com

Have a good one, all!

Saturday was birthday and cabaret day, as I spent the afternoon with friends to celebrate their son’s third birthday. One of his friends declared it to be a “boy party” – the kids had split off into girls (who were mostly older and friends of the older sister) and boys. Ever been in a room with a bunch of three-year-old boys and a basket of balls? Pande-freakin’-monium. The five-year-old sister of the birthday boy had her party back in November – and it was like Lord of the freakin’ Flies. This one was more Apocalypse Now.

From there, I high-tailed it over to Whistler’s for a grown-up birthday party with a gang of theatre pals from Cabbagetown Theatre – dinner downstairs, followed by No Sweetheart Required upstairs and back downstairs for the after party. Check out my NSR write-up on the Alumnae blog: www.alumnaetheatre.wordpress.com

Think I had one pint too many – but I was okay. Nicely toasted and goofy.

Missed a couple of things late last week/this past weekend: Sweets & Treats at the Village Playhouse (I’ve asked Alumnae friend/colleague Tina McCulloch to do a write-up on that for the Alum blog) and my pal, the lovely and talented jazz singer Kira Callahan, who did a Valentines gig at Hollywood on Thursday night. She did send me this great photo, though: 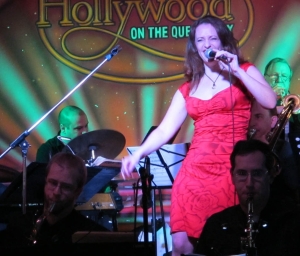 Sunday was a quiet day of brunch with a friend and doing some final weekend errands/chores. All in all, a good one.  And lovin’ the spring-like weather we’ve been having, however briefly.

Have a good one all.

Loving and working in the theatre is very much like being in the mob: you can’t quit.

Found myself talking about, thinking about, working on and otherwise attending the theatre a lot this past Friday night/weekend – from telling a new friend about my play Over the Lips over coffee on Friday night, to going to see friends in a production of Real Estate at the Village Playhouse on Saturday night, to prepping a package to submit Over the Lips to Clean Sheets (in Vancouver) on Sunday. Just. Can’t. Get. Away.

Oh well – there are worse things to be addicted to, I guess.

Check out my recent post on Real Estate on the Alumnae blog: www.alumnaetheatre.wordpress.com

Went to the Indian restaurant near my office for some lunch-time take-out and, barely in the door, I heard the owner behind the counter shout: “Beef thali to go!” to his co-worker in the back. That’s how I’m known there – “Beef thali to go.”

At the Vietnamese place near my house, I”m known as “Number 95 to go.”

For Swiss Chalet and the Thai place near my office, I tend to mix it up – and at least one of the folks at the Thai place (Ivy) knows me by my first name.

At work, I’m “Proofreader.” At the theatre, I’m “bloggergal” or “scenic artist” – at least lately. Sometimes “actor” or “playwright.”

And, I imagine I’ve been called things that I can’t publish here.

At various times in my life, I’ve also been girlfriend, lover, partner.

All of these things are me – to varying degrees. Facets. We all have ’em.

My mother also sometimes calls me “Diamond in the rough.”

This time, on a work day. Oh well. Made it in to work – but I’d rather be at brunch.

Realized that having a Faves page wasn’t the way to go – too much stuff on one page and it was looking a bit ungainly. To remedy this, I’ve ditched the Faves page and constructed separate pages for my arts/culture interests/obsessions. Enjoy!

Learned of another artist gone too soon today: tattoo artist Stan Wong, who died this past summer.

The last tattoo artist I worked with is not around anymore and that shop moved, I think, and I remembered that my brother Sean had mentioned that Stan was working at Way Cool Tattoos in Oakville. I looked up that shop on-line about a year ago to see if he was still there – and he was. But when I looked again today, there was a note from the shop, saying they’d lost their friend and co-worker.

I first met Stan back when I frequented Abstract Arts tattoo shop on Queen St. West in Toronto – and the previous artist I’d worked with there had moved on from that shop, so I started working with him. I didn’t really know Stan – my only experience of him was during the time we spent when he inked a few of my tattoos, but he was a good guy and an amazing artist. The first piece he did for me was on New Year’s Eve Day 1999 – the Circle of Brigit on the right side of my lower back. Later, he did a single wing for me on my left shoulder blade – and I was chuffed that he liked my hand-drawn design. Even later, he did a gorgeous Sacred Heart, in full colour, on my left bicep – and customized it so the flame rising from the top of the heart cupped the green Celtic cross I had above it.

I guess what I’m trying to say is that, even though I didn’t really know Stan, having someone ink you is a pretty intimate thing (unlike getting your photograph taken or a painting or drawing done of you). They’re etching colour into your skin – and there are health and safety issues involved here – and that’s art getting very personal. And, to varying degrees, it involves pain and blood – actual and emotional. A lot like an intense acting gig, I guess, but without the autoclave.

So, to artists gone too soon like Stan and Lindsay: Those of us who knew you and worked with you, even just a little bit, will miss you – and we thank you for sharing your artistry.

So not a lot of surprises in today’s announcement of Oscar nominations, but a few glaring omissions and baffling oddities:

I will admit my own personal bias and say that I liked Barney’s Version a lot. But WTF, Academy?!