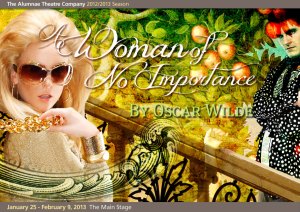 The tagline reads: “It’s not your great-aunt’s Oscar Wilde!” Make no mistake, Alumnae Theatre Company’s production of Oscar Wilde’s A Woman of No Importance, directed by Paul Hardy, is most definitely not a traditional staging of the play.

Brandon Kleiman’s minimalist and stunning set design (he does double duty as costume designer) provides the audience with a first peek at the world of Lady Hunstanton’s (Andy Fraser) country manor Hunstanton Chase. Upstage hang three window frames, each fractured at the bottom, with hundreds of brown paper butterflies hanging behind them. Downstage centre, two women in period costume stand side by side: one apparently an American, rather Puritan in dress and doing some needle work, and the other an Englishwoman with a closed-up parasol reading a book. Both politely acknowledge the other’s presence on occasion, but it is a tolerant rather than friendly sharing of the space. From either side of the stage enter a maid (Kathleen Pollard) and a butler (Daniel Staseff). Both disapproving of what they see, the two of them hatch a plan to usher the two ladies off stage. The quiet classical music that has been playing in the background morphs to 1980s club volume and intensity (sound design, nicely done, by Angus Barlow). Enter Lady Caroline Pontefract (Gillian English), all green and sparkly and bold make-up, looking very much like Edina from Ab Fab, joined by her husband Sir John Pontefract (Michael Vitorovich). Toto, we’re not in the 1890s anymore.

Hardy’s production transplants Wilde’s take on excess, morality and social repression into 1985. Margaret Thatcher is Prime Minister of England – and, this being England, the class divide is alive and well. And young Gerald Arbuthnot’s (Nicholas Porteous) promotion to secretary to Lord Illingworth (Andrew Batten) becomes a surprising – and unwelcome – family reunion with Gerald’s mother (Áine Magennis), whose life was ruined as a result of Illingworth’s callous betrayal.

Fraser does a lovely job as Lady Hunstanton, the delightfully warm, if not somewhat forgetful, hostess. And Batten is devishly charming as the amoral, entitled Illingworth. Paula Shultz’s Mrs. Allonby is both sharp and cat-like sexy, and the scenes between her and Illingworth – a dual of words drenched in sex – are marvelous to watch. Magennis gives Mrs. Arbuthnot a strong, quiet dignity – a woman who owns her mistake and determined to carry on as best as she can, a social undesirable living undercover so her son doesn’t have to suffer for her sin.

Whether that perception of “sin” translates well into the 1980s, I’ll leave up to you. There is certainly a continuing class and gender divide regarding what constitutes forgivable and unforgivable behaviour. And the play provides an interesting perspective on American vs. British regard for morals and society. It is interesting that it is young Miss Worsley, “the Puritan,” who ends up being the most flexible and forgiving. And, in the end, Gerald, his mother and Miss Worsley embrace that which is truly important – and love has its day.