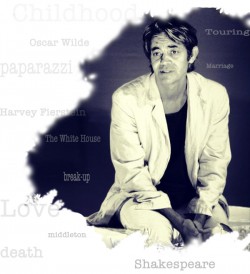 Every work of art tells a story – no matter what the medium – and likely our first experience of a story was having one read or told to us, usually by one person. Put that person onstage and they become part storyteller, part entertainer and even – if we’re actively listening and fully take the words in – part teacher.

Richard Sheridan Willis provides such an experience in his one-man show Strolling Player. Written by Willis and his wife Heidi Reimer, and directed by Robert Richmond, the play took root in Willis’s immigration application (British-born, he wed a Canadian), wherein he was required to account for his whereabouts and goings-on from the age of 18. This process inspired Strolling Player, the blog, highlighting the humanity behind the government forms – and the blog evolved into a theatre piece. Strolling Player, the play, appeared in the Toronto Fringe Festival this past summer and is currently being remounted at Red Sandcastle Theatre.

As he makes his entrance, dressed in a worn and slightly soiled white cotton suit, the sound of waves against the shore in the background, Willis appears as a world-worn wandering player with a hint of shipwreck survivor about him, like a character from Twelfth Night or The Tempest. Summoning the spotlight with a snap of his fingers, off we go.

Willis’s storytelling takes us from his childhood at his father’s theatre in Guernsey, to his life as an actor in England and abroad – including a death scene in Dr. Who, experiences working with the likes of Richard Burton and Daniel Day-Lewis, and learning the art of drag from Harvey Fierstein, and from the not so glamourous tour travelling to performing Shakespeare at the White House in front of President George W. Bush and First Lady Laura Bush. Professional anecdotes are woven with personal moments from life, love and family, aptly bridged with excerpts from Shakespeare and supported with snatches of music, the soundtrack of a life.

Deftly written and performed with masterful style, heart, wit and presence, Strolling Player is a magical, moving and marvelous trip through an actor’s life. Immediately rapt by Willis’s performance, the audience follows along with his shifting tone – from commanding to passionate to vulnerable, his rich voice evoking various people from his past and present, the characters of a life. We are thoroughly engaged from start to finish of this 90-minute piece. And then we hear the waves again. He snaps the spotlight off. And the journey is over. At least for now.

With shouts to composer Dougal Rose and designer Leah Reimer for their contributions to this remarkable play.

Strolling Player continues its run at Red Sandcastle Theatre. Originally scheduled to run Thursday through Sunday until September 22, it’s been extended to include performances on Sept 23, 26, 27 and 28.