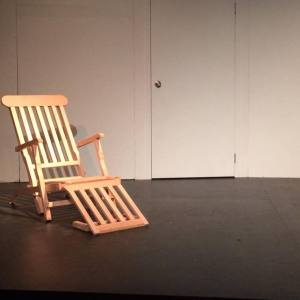 Amicus Productions explores the romance, mystery and tragedy of the Titanic in its production of Jeffrey Hatcher’s Scotland Road, directed by Victoria Shepherd.

“The Titanic – a symbol of arrogance, glamour and tragedy – has captured the imagination and passion of generations … Scotland Road tells the story of a passion so powerful that it transcends time and logic, completing a journey that was started over one hundred years ago.” – Victoria Shepherd (from the Scotland Road press release)

This is a perfect play for director Shepherd, a Titanic aficionado with a wealth of knowledge about the subject and a great love of storytelling. The “Scotland Road” of the play’s title refers to the lower-deck passageway that ran the length of the RMS Titanic. The cast does a lovely job handling the layers of these characters – like the enigmatic young woman, rescued as she floated in period dress on a piece of ice in the north Atlantic, each has his or her own mystery, and even a secret or two.

West McDonald is aloof, arrogant and entitled as John, with a touch of ruthlessness and cruelty – or is it something else? Laura Vincent takes the mystery-shrouded Woman from a mute, statue-like victim to a haunted, dreamy and passionate survivor. As the Woman’s medical caregiver, Anne McDougall gives us a Halbrech with compassion and empathy, protective of her young patient, with a decidedly tough and irreverent edge. As the last living Titanic survivor Frances Kittle, Paulette St-Amour brings a wry-witted, no-nonsense attitude to a seemingly frail and elderly recluse. But no one is as he or she seems.

Big shouts to a fabulous design team – Alexis Chubb (set), Emily Haig (costumes) and Jamie Sample (lighting) – whose work creates a world that’s time-trippy and eerie, the sterile and sparsely furnished set bringing to mind a piece of modern, utilitarian architecture, an iceberg and even the Titanic itself. And to master carpenter Brent Shepherd for the gorgeous replica first class deck chair (made of oak and pictured in the set photo at the beginning of this post), and sound designer/composer John Stuart Campbell for the evocative and haunting original soundtrack (give a listen to the song “Take Me Down”).

So much goes on during the course of this long one-act “metaphysical fairytale” (thanks to Victoria Shepherd for this phrase) that just when you think you’ve figured it out and can see where it’s going, it takes another turn. Then it’s over. And so quickly.

Check out the trailer for Scotland Road.

Artist Matt Chapman exhibits his Titanic-themed canvasses and plays music from onboard the ship before each performance. Read about Chapman’s first solo exhibit.

Scotland Road runs at the Papermill Theatre at Todmorden Mills until February 8. Check the Amicus website for exact dates, times and ticket reservations.