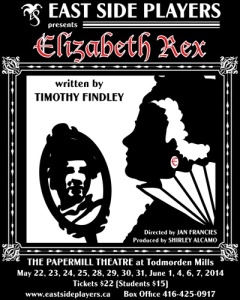 I had the pleasure of being back at Todmorden Mills Papermill Theatre last night for East Side Players’ production of Timothy Findley’s Elizabeth Rex, directed by Jan Francies.

A history-inspired, memory play, Elizabeth Rex presents William Shakespeare as our host, as he remembers an evening in a barn with the Lord Chamberlain’s Men after a royal performance of Much Ado About Nothing 15 years earlier. It is the evening of his own death; in the memory, it is the night before Elizabeth’s ex-lover Essex goes to the axe for leading an uprising against her. In the memory, the men are visited by a restless Queen – and throughout the night, Elizabeth, Shakespeare and actor Ned Lowenscroft (famous for playing women) exchange quips and debate the nature of identity from the various angles of sex, gender, politics, art and power. All played out with the ever-present chiming of the clock – reminding all that time is running out.

Francies has an excellent cast for this journey: Lydia Kiselyk’s Elizabeth I is layered with all the complexity and power of this fascinating monarch. She is sharp-witted and regal, suffering no fools; yet open to council even as she is torn between emotion for her former lover Essex, and duty to her position and country. Michael Harvey gives us a lovely Ned Lowenscroft, with a rapier wit, a diva’s demand for perfection and an unapologetic love of men, coupled with vulnerability and empathy, and the haunting knowledge that his time and life are ebbing away as he struggles with his own impending death from “the pox” (syphilis), contracted from an evening with a handsome Irish captain. Christopher Irving brings us a passionate, cerebral and conflicted Shakespeare, performing a careful balancing act with the often opposing demands of art and politics, even as he comes to terms with his own feelings for the young Earl of Southampton. Other cast stand-outs include Malorie Mandolidis, who is a delight as the far-sighted company seamstress and den mother Kate Tardwell; and Paddy Cardarelli is endearing and lovable as veteran player Percy Gower, who loves to tell how he once intoxicated men with his portrayal of women before he came to be a character actor in his advanced years.

In addition to the symbolism of the tick tock of the clock, we are reminded of humanity’s inescapable final destination through the bear that Lowenscroft rescued from the pits, which moans with painful remembrance when the dogs bark, the hounds constantly nipping at its heels, even if just in its mind. And there is a beautiful moment of compassion and comfort between two key players, mirrored by one of the actors holding the bear as the dogs bay. Findley also provides a thought-provoking image of a present-day ‘pox’: Lowenscroft’s pox sores resemble those of AIDS-induced Kaposi’s sarcoma, his colleagues asking if he knew how, and from whom, he came by the disease.

With shouts to set designer David August and lighting designer Clay Warner for the transformation of the Papermill stage into the Queen’s barn, the warm glow of candlelight on wood, the metal of the brazier and tack, and the use of the top loft space opening in that gorgeously mottled red brick back wall; and to the exquisite period costumes by Alex and Carmen Amini of Chifforobe.

East Side Players’ Elizabeth Rex is a beautiful, moving and finely acted exploration of identity, and the inevitable and finite tick tock of life. This play is not produced often, so it’s well worth the trip to the Papermill Theatre – the show runs until June 7.

One thought on “A beautiful, moving look @ identity & the inevitable tick tock of life – East Side Players’ Elizabeth Rex”