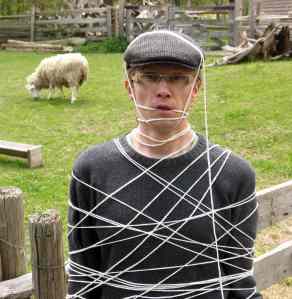 I spent a lovely evening at the Majlis Art Garden last night, for a preview performance of the SummerWorks production of Alex Eddington’s one-human show Yarn, directed by Tyler Seguin and Helen Juvonen.

It’s a covered outdoor space with chairs set up in a semi-circle around a stage that sits in the nook of what sort of looks like an open-sided garage, but used to be a welding studio. Sitting in the cool summer air before the show started, breathing in the smell of cedar chips and taking in the smiles of fellow audience members as we listened to Eddington’s sound check, I had the opportunity to chat with Trisha, whose home is part of the building, about the space. A seasonal performance space in the Queen West neighbourhood, Majlis Art Garden gets its name from the Arabic word “majlis” – meaning “a place to sit” – the space’s name inspired by the “majalis” of the golden age of 10th century Spain, salon-like gatherings featuring music, dance, poetry, philosophy and debate.

If Eddington didn’t have me already – and he did – he had me with these lyrics.
Based on a true story, Yarn is the story of a young man’s journey to the Isle of Mull, Scotland in a quest to find his voice. He gets a job as a chambermaid, and plans to spend his free time seeing the sights and composing. Told through song, wordplay, music and digital looping, storytelling and a puppet named Buttercup, Eddington weaves his tale, a one-human cast of several characters, not all human.

Ancient mythology, superstition, wishful thinking and unexpected adventures abound, with Eddington’s goings-on running parallel to that of the young man in the story within his story. As he mixes traditional storytelling and musicianship with modern technology – playing music on both standard and found object instruments – the effect is quite enchanting. And the bodhrán that hangs up centre doubles as a screen for shadow and light play, as well as a looking like a full moon, presiding over the mystic landscape. And I love the purple trombone.

LIfe is what happens when you’re trying to come up with your story.

Yarn is a magical, imaginative and entertaining piece of storytelling. Go see this – check out details for dates/times here. And be sure to check out upcoming arts events at Majlis Art Garden.

2 thoughts on “SummerWorks preview: A magical, imaginative & entertaining piece of storytelling in Yarn”