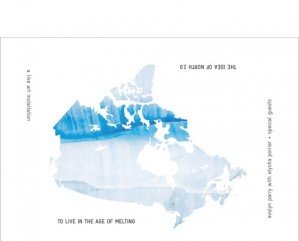 It was a chillier than usual August night in Toronto last night – and I found myself purchasing hot chocolate and wishing I’d brought a jacket, which felt odd – but it was what it was. To be honest, I’ve really been enjoying this cooler summer. I had some time before my next show, so it seemed like the perfect opportunity to stop by Studio C of the Pia Bouman School for Creative Movement to check out Evalyn Parry’s work in progress – with fellow creators/performers Elysha Poirier and Laakkaluk Bathory Williams – for OutSpoke Productions’ To Live in the Age of Melting: The Idea of North 2.0, part of this year’s SummerWorks Live Art Series.

The first phase of To Live in the Age of Melting is part installation, part viewer participation, as Parry collects objects and images from patrons of their experiences of the North, and asks people if they’d like to be interviewed about their thoughts and perceptions of the North.

Featured prominently when you first enter the space is a giant map of Canada. Visitors are invited to share how far north they’ve been – and Parry’s assistants (in my case last night, SummerWorks volunteer Pauline and Aidan) will plot your destination on the map, from start to finish, using pins and colour-coded string/thread. In my case, it’s the Greater Toronto Hamilton Area (GTHA), Ontario to North Bay, Ontario; my thread is black, as I took the trip by car (with my family when I was around 10-12 years old, when my mother’s sister and her family lived in Callendar, ON).

I also took the opportunity to be interviewed. Since I’m not down with spoilers, I won’t mention the specific questions Parry asked me, but I will say they were extremely thought-provoking and interesting. A reminder of relative perspective – when I think of “North,” in terms of perceived geography, I think of it as starting around North Bay – but that’s the farthest I’ve been, so that will be different for someone who’s been to NWT, Yukon, Nunavut or Iqaluit. It was a pleasure chatting with Parry, and I look forward to seeing the work come together in the performance this weekend.

The assembled personal artifacts and interviews will contribute to the final performance piece, which will also be a work in progress (as the installation and viewer contributions continue daily from 5:00 – 8:00 p.m.) – with performances running Aug 15-17 at 9 p.m.

Here are some snaps I took of this work in progress last night:

In the meantime, check out NOW Magazine’s piece by Glenn Sumi, where he speaks with Parry about, among other things, her two SummerWorks projects: directing Shaista Latif’s Graceful Rebellions and the genesis of her work on To Live in the Age of Melting.

One thought on “SummerWorks: Installation & audience contribution leading up to performance of To Live in the Age of Melting: The Idea of North 2.0”