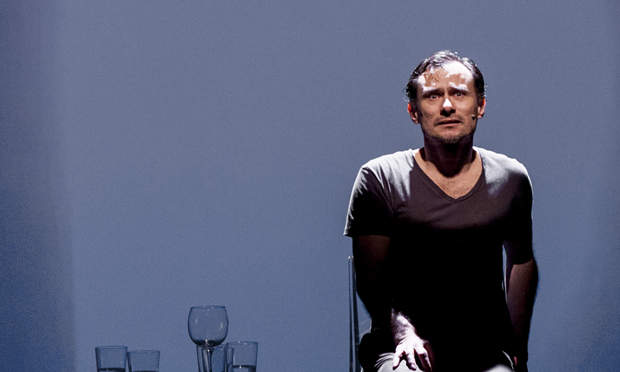 A kid who’s fascination with his weird next door neighbours turns to morbid fixation following a horrific event in their home.

A boyfriend and girlfriend constantly fight as she longs for marriage and a baby, and he gropes for an unknown something that’s just out of reach.

Appalled by his own script, a filmmaker brings his film shoot to an abrupt halt in an effort to disengage from – and disown – the darkness portrayed.

All hosted by the devilishly charming narrator Adam, his Puck-like mischievousness tinged with malevolence.

White flats stretch across expanse of the playing space upstage, serving as a screen for the projected atmospheric and scenic images. A clear plastic chair with an accompanying glass table, bearing mostly glasses of water and one glass of red wine, sits centre stage. It is here that performer/producer/co-translator/co-director Enrique Diaz spends most of the play – but only after hanging out with the audience a while, and then offering an introduction and instructions as to how the play will begin.

Which all happens when he rides a red tricycle around the stage and the lights go to black out. We have begun.

This is Cine Monstro, a Portuguese translation (by way of Brazil) of Daniel MacIvor’s Monster, translated Barbara Duvivier with Diaz, directed by Marcio Abreu and presented/curated by Why Not Theatre for SummerWorks’ inaugural PROGRESS international festival of performance and ideas at the Theatre Centre.

It was my first time seeing this play – in any language – and my initial concern about splitting my attention between the English surtitles and the action onstage was quickly dispelled. Cine Monstro is a dynamic, sight and sound-filled trip. And I’ll never hear “Raindrops Keep Falling on My Head” (which folks may remember from the Butch Cassidy and the Sundance Kid film soundtrack) again.

Diaz is an engaging and compelling storyteller, skillfully weaving in and out of the various characters and scenarios with truth and a sense of the present, balancing light and dark with the warmth of his voice and the sharpness in his eyes.

Following last night’s performance, Why Not Theatre A.D. Ravi Jain moderated a talkback with Diaz and MacIvor, who took questions from Jain and the audience, as well as a brief interview (in English and Portuguese) with Omni TV. And it was Jain who was the connecting thread between the two artists.

MacIvor described the process of creating Monster, taking inspiration from the film world, reading The Fifth Child, the impending birth of a friend’s baby, among other things. Diaz first saw MacIvor perform in two-hander In on It in New York, and was fascinated by the layers, structure and humour of the piece – and the work the audience must do in the process of watching.

Last night was the first time MacIvor saw Cine Monstro, and while he seems to be less comfortable with interpretations of his one-person shows in general (which are more his babies, as he both wrote and performed them), he is pleased with this production and marvelled at Diaz’s multitasking. Diaz described his experience as an exercise in relaxing into the piece, focusing on the text and getting any sense of ego out of the way.
Jain remarked how present the text is when one is watching a show with surtitles: “we engage with the ideas in a different way – engaging with the text itself.” Diaz was nervous about whether the audience would follow the show, with their attention divided between the watching the action and reading the text (translated back from Portuguese to English, while maintaining the original English script) – but we were fine.

The question of language rhythm came up: was it an issue with the translation? This didn’t seem to factor into the show as much as what the actor brings to the performance. MacIvor spoke of approaching it differently – with tension and rapid pacing, barely moving from the chair throughout his performance. He also remarked how he found Diaz’s interpretation warmer in tone, with a stronger placement in the film world – especially evidenced by the “Cine” in the title of the translation, which reveals Diaz’s intention to immerse the audience in the story. Diaz worked with the translation as an actor, and seems to have taken an organic approach, as opposed to focusing on the rhythm of the language per se.

Another audience member wondered if having an original work interpreted by others around the world represented a shift in MacIvor’s work – a “revisiting of the Canadian cannon,” as it were. Whether this is an overly optimistic outlook or not, with Cine Monstro, Diaz has made the piece his own and has introduced MacIvor’s theatrical storytelling to a whole new audience.

Cine Monstro is a diabolically funny trip into the flickering dark and light of the destructive side of the human spirit.

You have one last chance to see Cine Monstro: tonight (Sat, Feb 14) at 8p.m. – the place was packed last night, so I strongly suggest that you book ahead. In the meantime, check out the Cine Monstro trailer on the Why Not Theatre website.