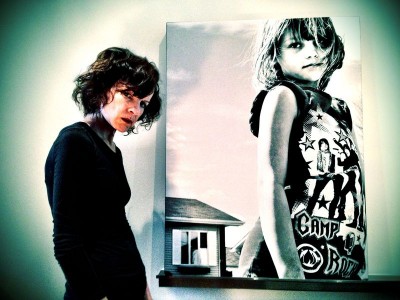 Brilliantly conceived and performed, with sharply-drawn characters, Hoyt is the orchestra, and Ashby’s west end Toronto photographs are both the sheet music and the conductor. Combining improvisation with personal storytelling, Hoyt responds to each photograph that appears onscreen by acting out the scene and using this as a jumping off point for anecdotes of moments and memories from her own life.

A woman sitting by herself outside the ROM, her back to us, sits across the sidewalk from a solitary man – their postures informing the tone of the characters as the story takes an unexpected, comic turn. A sign taped to the window of a bar, advertising a  karaoke night hosted by Maria creates a multicultural/multilingual cast of characters that incorporates the audience and includes a shy would-be performer who longs to sing “Edelweiss.”

People out on the street, some of them homeless. A shirtless old man sitting on a stoop, cigarette in one hand as he gestures with the other, becomes “The Captain.” A guy and a girl panhandling on the sidewalk, the girl eating an ice cream cone with a dog snoozing under her outstretched legs, becomes a family, each member with very different priorities. A young man with a parrot becomes a licensed street busker. And a scene of a woman and two men sitting side by side on the subway unfolds into moments from a disappointing second date witnessed by a watchful secret admirer. In the end, all six photos appear – and each of these fictional, improvised moments and lives are wrapped up with a final word from the characters.

Funny, poignant and observant – Face Value: West captures the humanity and quirkiness of everyday folks hanging out in Toronto’s west end. All in all, a delight to watch.