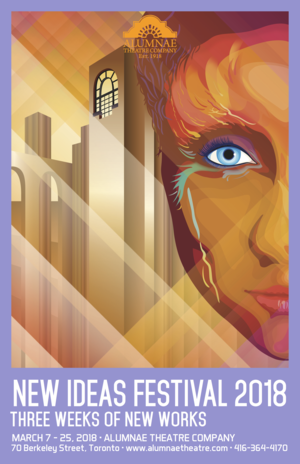 The Devil and the Deep Blue Sea by Natalie Frijia, directed by Kay Brattan. In 1882 Toronto, 39 people have mysteriously drowned in Lake Ontario—and rumour has it there’s a monster beneath the slate blue water. Rookie reporter Marjorie May (Emma Tse) is determined to get the story, visiting Mary-Anne’s (Stella Kulagowski) pub down by the docks to gather some information. Things get real when they’re joined by the terrified Captain O’Connell (Shawn Lall), who’s barely escaped with his life. As the incoming storm batters the pub, there’s something else out there in the night. Is the creature coming after the Captain to finish what it started?

Nice work from the cast building the intrigue and tension in this 15-minute piece of exaggerated Toronto history. Tse brings a youthful sense of feisty defiance to the young reporter, while Kulagowski is fiery and cynical as the voluptuous barkeep; and Lall’s Captain runs the gamut from frozen terror to gritty resolve as the three stand together in the end.

Marty and Joel and the Edge of Chaos by Camille Intson, directed by Lorna Craig. Chaos theory meets romantic dramedy in this delightful and poignant two-hander played out by four actors. You’ll see what I mean. A couple—Marty (Allison Shea Reed/Kim Croscup), a physicist, and Joel (Simon Bennett/Ryan Bannon), a photographer—occupies the same space in two different times: the day they met and the day of Joel’s second marriage some 20 years later. Constructing and deconstructing the relationship, we see them go from first love to finally working toward some closure.

Beautifully acted and staged. Shea Reed and Bennett are adorably awkward as two 20-somethings getting to know, and falling for, each other. Marty and Joel seem to be perfect complements to each other, with Marty’s adventurous nature and nerdy science knowledge, and Joel’s creative, intuitive sensitivity. As older, more world-weary and disillusioned versions of their former selves, Croscup’s Marty is frustrated and angry, still looking for the answers; and Bannon’s Joel has moved on, but still cares deeply for Marty and treasures their relationship.

The Officiant by Francesca Brugnano, directed by Paige Foskett. It’s 1938, and Shirley (Brianna Riché) and William (Jordan Kenny) have stolen off into the woods, where Shirley has decorated a clearing for them to be secretly married. But when the Officiant (Lisa Kovack) arrives, the wedding service gives them a glimpse into their future together, making them think twice. Is it worth all the pain and suffering?

A lovely, poetic dance of text and movement to tell this story, with moving work from the cast. Riché is brave, romantic and practical as Shirley; and Kenny brings an earnest boyish charm to William. Kovack gives the Officiant a witch-like air of mystery and foresight; cruel to be kind, she means to get real with this couple.

Mourning after the Night Before by Chloë Whitehorn, directed by Heather Keith. When Lucy (Mary Wall) and Drew (Dave Martin) decided to move to a small town, they did it to make to make a quieter, more peaceful home for their family. Making friends with brother and sister Everett (Conor Ling) and Fenwick (Tiffany Deobald), locals who help them get settled, Lucy struggles with her relationship with her daughter Pippa (Grace Callahan), as well as emerging feelings for Everett. Everett is falling in love—but is it with Lucy or Pippa? Drew and Fenwick are trying to keep their respective families safe. Did Lucy miss something in Pippa’s dark, teen angst-filled poems?

Lovely work from the cast in this haunting, lyrical family drama. Wall is wounded and desperate as Lucy; heartbreaking in a life adrift and grasping for a sense of self. Martin’s Drew is heart-wrenching to watch; sensitive and supportive, Drew doesn’t know what to do—and finds himself drifting farther from his family. Callahan gives Pippa an ethereal, creative spirit; a somewhat wild and rebellious teen, she finds solace in writing. Ling brings a sweet, shy romantic edge to Everett; while seeing anew with these new relationships, Everett’s eyes may not be wide open. Deobald is an irreverent charmer as Fenwick; tasked with raising Everett after they were orphaned, Fen is just trying to keep it together, but shows genuine concern for the rift between her new friends Lucy and Drew.

The NIF Week Three program continues in the Alumnae Theatre Studio until March 25. Get advance tickets online or by calling the box office: 416-364-4170, ext. 1 (cash only at the box office). Performances run Wednesday – Saturday at 8 pm, with matinees on Saturday and Sunday at 2:30 pm.

It’s a very popular festival and an intimate venue, so advance booking is strongly recommended. In the meantime, check out the Week Three trailer by Nicholas Porteous:

Arts/culture social bloggerfly. Out & proud. Torontonian. Likes playing with words. A lot. View all posts by life with more cowbell

2 thoughts on “New Ideas: The chaotic metaphysics of life, love & monsters in the water in the funny, moving, poetic Week 3 program”