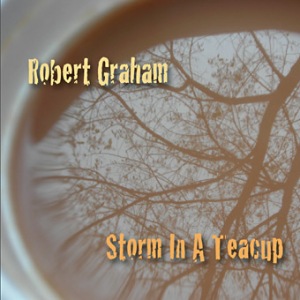 When I dropped by Red Sandcastle Theatre for the In Loo Of fundraiser a few weeks ago, owner/manager/AD Rosemary Doyle introduced me to Robert Graham, who was there to accompany singers on piano for the four-day open mic event. While chatting with Graham, I learned that he’s also a singer/songwriter – and I headed home that evening with a copy of his Storm in a Teacup CD.

Storm in a Teacup starts out with the gentle, unassuming instrumental track “Blue Lullaby (Intro.),” slips into pop ballad “Reaching You” and finishes with a soul vibe on “Set it Free (Afro-Astro Mix),” a remix of earlier mellow pop track “Set it Free.” From the epic rock-operatic “Living in a Coma” to the comic tale of unrequited love in “In Love with a Girl” to the haunting jazz/blues-infused piano instrumental “Second Prelude,” there’s a big range of emotional and musical expression on this record. And “Jonathan Baker” combines the whimsical poignancy of Beatles storytelling with the dark social commentary of The Police’s “Synchronicity II” – a quiet life of desperation about to explode in the face of a cruel world. The lyric “It’s easy to be nasty. Sometimes it’s worthwhile to be nice” is particularly potent. Storm in a Teacup is a trippy journey through genres and musical moments, each song a brand new vibe. Check it out.

You can catch Robert Graham, playing with his new band The Fairest and the Best at The Central on Monday, May 13 at 7 p.m. And on Friday, May 24, he’ll be hosting Robert Graham and Friends – A Fundraising Concert for the “We Are Jose” Campaign – 7:30 p.m. at Lower Ossington Theatre. For details on these two shows, please visit the Gigs page on Graham’s website.

In the meantime, you can also pay him a visit on his YouTube channel and check out his new single “Believe In Love.“

2 thoughts on “An eclectic, trippy journey through sound on Robert Graham’s “Storm in a Teacup” CD”