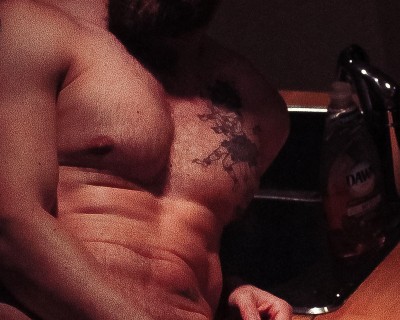 Yep, you read that right. This is the multidimensional storytelling the audience experiences in Groundwater Production’s Beautiful Man, written by Erin Shields and directed by Groundwater co-Artistic Director Andrea Donaldson – now running at the Theatre Centre Mainspace as part of SummerWorks.

It all starts with three friends talking about a new cop movie featuring a female homicide detective on the hunt for a serial killer who’s preying on beautiful young men. After the cop’s nurse boyfriend gives up on their now cold anniversary dinner when she’s late getting home, she sits down to relax and watch TV: a sword and sorcery tale where women are the rulers and warriors, with men acting in the periphery as consorts or slaves. And so the nesting doll structure of storytelling begins – talking about the movie becomes a discussion about the TV show within the movie, then morphing into the play within the TV show and the puppet show within the play. Got it?

Oh, yeah, and Brett Donahue is the Beautiful Man. And he certainly is. Positioned in the background, upstage on a platform behind the three women, Donahue does a great job taking on the roles of each of the beautiful men in these stories – from the cop’s neglected boyfriend, to the queen’s consort, to a wounded soldier bound for his captor’s harem of men. You get the picture.

A reminder to never underestimate what turns women on – and that sex and violence have universal appeal. It’s very possible that the cop in that movie needs to be looking for a female serial killer. In fact, I’d be willing to bet that a bunch of unsolved real-life cases went cold because the cops weren’t looking for a female perpetrator.

With shouts to music and sound designer Richard Feren for the bang-on Game of Thrones-inspired soundtrack.

Turnabout is fair play as women, and their sex and violence fantasies, take centre stage in hilarious, insightful Beautiful Man.

Beautiful Man continues at the Theatre Centre Mainspace until Aug 16 – check here for the show’s full schedule. This is another very popular show, so advanced booking or early arrival at the box office is strongly recommended.

In the meantime, check out the teaser trailer: