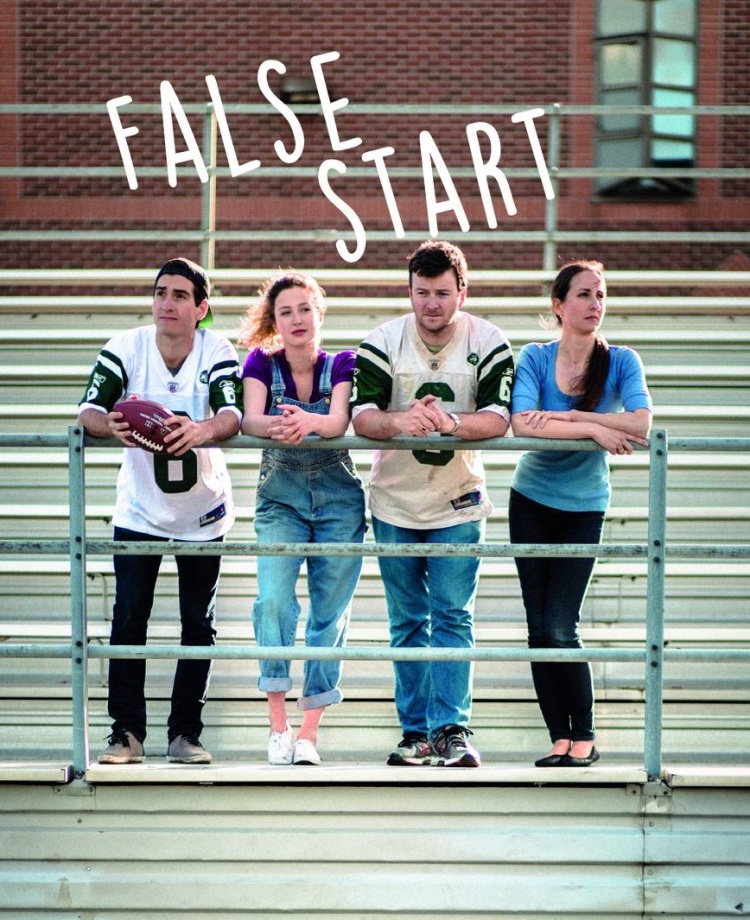 Green Box Theatre Company plays with time and space to reveal the evolution of a relationship in its Toronto Fringe production of Nicole Hrgetic’s False Start, directed by Mani Eustis and currently running at St. Vladimir Theatre.

Zoey (Elizabeth Adams) and Jake (Dylan Evans) meet in high school when Jake is in desperate need of a math and science tutor to save his GPA and his chance at a football scholarship. About 20 years later, Zoey (Andrea Brown) is in desperate need to start a family, and needs Jake (Andrew Knowlton) to be on board with her ovulation schedule after several miscarriages.

Effectively and organically staged, the lives of younger and older versions of this couple inhabit the space in different times and spaces, with scenes overlapping as time shifts from past into present and back again. And there’s some really lovely use of upstage projection, showing us the night sky on their first date and Jake’s beloved Jets football game.

There’s a comfortable, almost relaxing rhythm to this relationship, even during moments of tension – largely due to the great chemistry of the pairings. Adams and Evans have a lovely, awkward and youthful sense of playfulness, with Adams as the smart, sharp-witted and mature younger Zoey, and Evans as the impetuous, cocky and sweet Jake. As their grown-up versions, Brown’s gives Zoey a gentle air of gravitas; still the smart, responsible one, she still can’t help but smile at Jake’s puckish antics. Knowlton’s Jake is still a lovable, infuriating boy; he loves Zoey to death, but can’t help but feel a failure when he compares his job as a gym teacher to her successful corporate career in science.

In the end, both Zoey and Jake must come to terms with lost dreams, both personal and shared. These high school sweethearts still have each other. The only question now is: Where do they go from here?

Zoey and Jake, now and then, in the lovely, playful and moving nostalgic journey False Start.