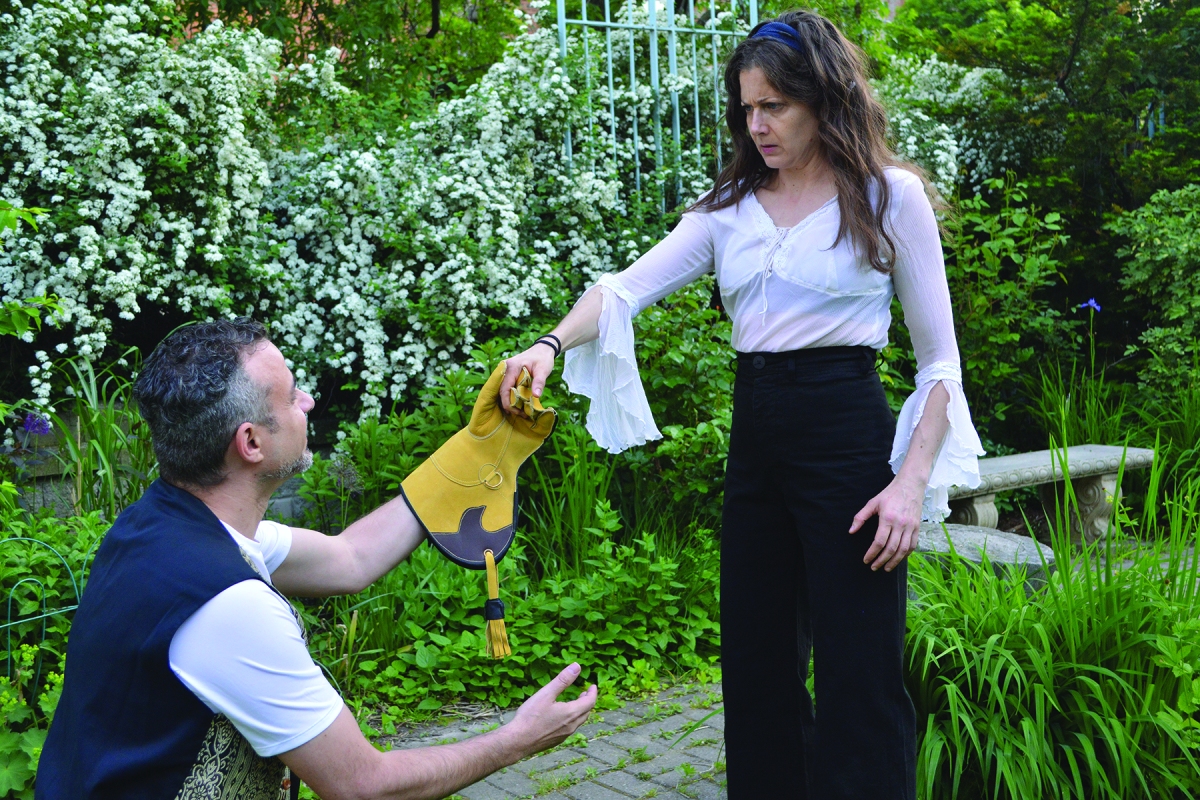 Aquarius Players bring Shakespeare to the Fringe stage with their madcap, playful production of The Taming of the Shrew, directed by Nicole Arends and running in the St. George the Martyr Courtyard.

Baptista (Scott Moore) has two daughters: the wild Katherine (Alexandra Milne) and the sweet Bianca (Greta Whipple). Bianca has a few suitors on the scene: older locals Hortensio (Chris Irving) and Gremio (Daryn DeWalt); and a new face in town, the young Lucentio (Michael Pearson), who is smitten on sight. Problem is, Baptista is determined to marry Katherine off first—but no one will have her.

Enter Petruchio (Chris Coculuzzi), who has recently inherited his father’s estate and is out in the world looking for adventure. Hortensio and Gremio convince him to woo Katherine—exulting her great dowry and father’s wealth—so they may continue their suits with Bianca. Meanwhile, Lucentio has hatched a plan of his own, switching places with his servant Tranio (Paige Madsen), who will run interference with the other suitors and press his suit to Bianca while he inserts himself into Baptista’s home as a tutor. Here, he winds up in hilarious competition with Hortensio, also in disguise as a tutor.

Petruchio marries Katherine and takes her to his home, assuming extreme, erratic and bizarre behaviour himself to gradually calm her and get her rage under control. His servants Grumio (Elaine O’Neal) and Curtis (Christina Leonard, who also plays Lucentio’s sax-playing servant Biondello, who leads us around the courtyard as the scenes change) are both in on and puzzled by all of this. It all becomes a crazy game of ‘Petruchio says,’ and he and Katherine fall in love as her cold, hardened heart melts.

Lucentio and Tranio have a few more tricks up their sleeves, including disguising a wandering Pedant (Irving) as Lucentio’s father Vincentio, who will vouch for Lucentio’s character and station to Baptista—a decision that blows their cover when the real Vincentio (DeWalt) shows up. By then, Lucentio and Bianca are already married; and their agreeable fathers forgive them as they host a wedding feast for friends and family. And, with the mad cap craziness of the Petruchio/Katherine dynamic, Katherine’s final speech advising wives to follow their husbands’ lead—though still challenging by today’s standards—becomes an argument for wives to take the lead on maintaining peace and serenity in the household.

The cast is an entertaining delight in this lively 90-minute outdoor Shakespearean romp of love, disguise, competition and well-meaning manipulation. Coculuzzi and Milne are nicely matched as the patient, meticulous rogue Petruchio and the enraged, neglected wildcat Katherine; her extreme internal rage boiling over to the surface, she behaves like a wild animal—and he applies a remedy appropriate to taming a wild creature, with great care and calculation. They are nicely supported by the ensemble, especially Whipple’s bratty favourite daughter Bianca; Pearson’s lusty, love-struck Lucentio; Madsen as the puckish wise servant Tranio; and Leonard’s awkward child-like Biondello. And Irving and DeWalt give great comic turns as Bianca’s thwarted suitors, with Irving doing hilarious double duty as the saucy, likely drunken, Pedant.

With the mercurial word play, and imaginative physicality and comedy, this Shrew is a mad world of rage and love—with wacky desperate situations requiring equally wacky desperate measures—and love wins in the end.

The Taming of the Shrew continues in the St. George the Martyr Courtyard, with two more performances: today (July 13) and July 14 at 2:00; check the show page for advance tickets. Chairs are available in and around the courtyard for those who need them; otherwise, there are blankets to sit on.

Missed a show or want to see it again? Check out the latest Fringe announcements: Fringe Awards & Patron’s Picks and Best of the Fringe.